During the month of July, I will be writing exclusively about the Friday the 13th movie franchise. The series is a classic of the slasher genre, and during my teens, I harbored a pretty healthy obsession with all things horror, so naturally I started collecting DVDs from the series. I currently own the first five movies in the franchise, and, fortuitously, July has five Sundays, so this will be the official Friday the 13th month on my site. Some of these posts might be a little shorter than my normal review because, to be honest, these movies can get a bit repetitive as the series goes on, but I’ll try to keep it interesting and look into what makes each of these movies work (or not, as the case may be) both as a film and within the confines of their own micro-genre. There’s no better place to start than at the very beginning with the first visit to Camp Crystal Lake, and the movie that launched the most financially successful horror franchise of all time.

The original Friday the 13th begins with the re-opening of Camp Crystal Lake, in New Jersey, after some twenty years of dormancy. The camp was shuttered after some negligent camp counselors let a young camper, Jason, drown in the lake. However, a new group of counselors arrives at the campground, ready to fix it up and reopen the camp for the summer, despite the warnings of the townsfolk about the campground, which they refer to as “Camp Blood,” being cursed. In the midst of a terrible storm, the counselors are separated as a killer stalks through the woods. In predictable fashion, the unheeded warnings prove to be warranted, and counselors start disappearing one after another as it becomes apparent that the group is not alone at Crystal Lake.

Though it was clearly inspired by earlier slashers like Halloween, Friday the 13th is largely responsible for setting the genre template for the modern slasher film. It upped the ante on blood and gore, and moved the setting from the suburbs to a remote, rural campground, heightening the sense of fear and isolation in the movie. Though all of its generic tropes have become rote by now, they must have seemed fresh and shocking when the film was released in 1980, causing audiences to flock to the movie which became a run-away box office success. The film’s popularity might be largely due to the fact that it alters the established slasher template enough to seem novel at the time, replacing the creeping dread of Last House on the Left with a more episodic, start and stop type of horror, with kills popping up at random and causing a roller coaster type of thrill effect on the audience. The film also eschews some of the more disturbing aspects of hardcore horror films that preceded it like The Texas Chainsaw Massacre, making for a more accessible and easier to digest horror movie experience. While it’s certainly gruesome, Friday the 13th feels more like escapism than a broadcast from a doomed and sickening society, which early Wes Craven and Tobe Hooper films certainly resemble. Cunningham is more intent on causing jump scares than creating a world that’s skin-crawlingly disturbing, and the end result is a horror film that feels lighter, though no less vital or important, than its contemporaries. 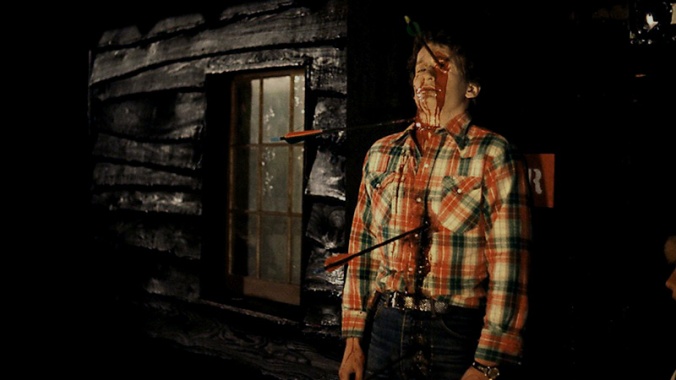 Friday the 13th is an altogether predictable movie. From the outset, the audience knows that the warnings from the townsfolk ought to be heeded by the counselors, and they also know that the entire film is predicated on the counselors not heeding those warnings and continuing to be typical sex-crazed teens. Like most slashers, Friday the 13th equates sex and death, in most cases quite explicitly, with the counselors being murdered either during, or right after performing, a sex act. I think this inherent conservatism in slashers is something that’s always interested me, the thinking that young people should be punished (with death) for being sexually explorative. I’m not sure why, as I strongly believe that people have an inherent right to freedom of sexual expression provided that they’re acting responsibly and consensually, but I’ve always been curious about the equivalence of sex and murder in horror movies. Often, the killers in these films as viewed as someone whose sexual deviance or impropriety has driven them to kill, or they’re shown as being so psychosexually repressed that they are driven to seek out victims who they feel are acting out urges that they are unwilling to claim and act upon, so they choose to pass lethal judgment on these victims. Friday the 13th carries on this tradition, established in earlier horror films, and helps it to cement its place as a hardwired genre trope. 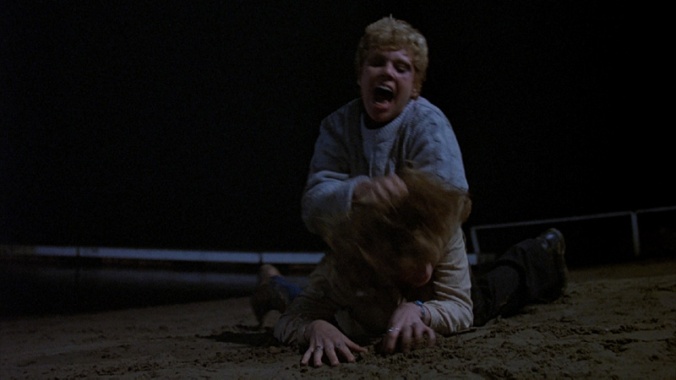 The one thing that is relatively untraditional about the original Friday the 13th is that it features a female killer. The killer is never seen throughout the early parts of the film, instead her presence is implied through point-of-view shots and the film’s now iconic score. When the killer is finally revealed, it’s not the familiar hockey mask-sporting Jason, but instead his mother, played by Betsy Palmer. Mrs. Vorhees was a cook at Camp Crystal Lake, and, as she explains to Alice (King), the last surviving counselor, her son, Jason, was the young boy who drowned in the lake, prompting the camp to close. It dawns on Alice that she is in the presence of the person who murdered her friends, and she takes off, providing one final, thrilling chase scene. The usage of a female killer, though not entirely novel at the time, certainly provides for an unexpected twist at the film’s end. Up to this point, all signs had pointed to some sort of supernatural explanation for the return of the drowned Jason, but Mrs. Vorhees’s is an earthbound entity with a practical reason to want to seek her revenge. I can remember finally getting to see the original movie in the franchise and being shocked that there was no Jason. I had only seen a handful of the later sequels on television, and I just assumed that the killer would show up in his familiar hockey mask, wielding a machete, and so I was rather taken aback when there was little mention of Jason at all. This genuine surprise gives the film a bit of depth that many of its sequels lack and ups its rewatchability quotient.

The original Friday the 13th isn’t the high water mark of quality for the series, nor is it the highest grossing entry in the franchise, but it was unique and successful enough to spawn its incredible lineage. The franchise was originally conceived of as a series of anthology films, but the original’s epilogue, in which an exhausted Alice falls asleep in a canoe drifting out to middle of Camp Crystal Lake after decapitating Mrs. Vorhees, only to be roused by a pale, bloated young Jason emerging from the depths of the lake to try and drag her to her death, practically demanded that a sequel centering on the undead Jason be released. These sequels would vary wildly in quality, as I’ll discuss in the weeks to come, but they all managed to be relatively safe box-office bets until the series began to run out of steam in the early 1990s. For a while, though, Friday the 13th was a reliable and bankable commodity at the box office, and that all started with the original slasher back in 1980.