Written by: Ron Kurz (based on characters created by Victor Miller)

The first sequel in the Friday the 13th series marks a decision on the part of the series’ creators to eschew their original plans of making an anthology horror film series and to double down on tales of psycho killer Jason Vorhees hunting lustful teens in the remote woods of New Jersey. Predating the eventual sequels to earlier slashers Halloween and Texas Chainsaw Massacre, as well as the entire run of A Nightmare on Elm Street, Friday the 13th Part 2 marks the first movie, that I know of, to introduce the trope of the immortal or invulnerable slasher. The ending of Halloween hints at Michael Meyers’s indestructability, but this sequel is the first that brings us a killer who was, ostensibly, killed off in the first film, in this case as a child, no less. Other than that minor innovation, the film otherwise sticks to the basic slasher template, and provides a handful of satisfying kills, but few real scares. It hews closely to the plot and pacing of the original, and though it’s the first film in the series to feature an adult Jason, it fails to really break any new ground or push the series forward in a meaningful way.

The sequel begins shortly after the original Friday the 13th left off, with that film’s heroine, Alice (Adrienne King), still haunted by nightmares of her ordeal at Camp Crystal Lake and of the undead boy, Jason, who she dreamt emerged from the lake at the film’s end to drag her to her death. It turns out that her fears are warranted, as a fully-grown Jason (Gillette/Dash) has stalked her to her home and the film’s first scene culminates with him avenging his mother’s death at the hands of Alice in Friday the 13th. From there, the film flashes forward five years and the audience is introduced to a new group of camp counselors who are attending a counselor training program led by Paul (Furey) at a camp adjacent to Camp Crystal Lake. These counselors are young, horny, and stupid, with few distinguishing character traits, much like the group of counselors in the original. As such, it isn’t particularly shocking or emotionally devastating when Jason descends upon the camp, skewering and slashing counselors right and left. Eventually, Paul’s girlfriend Ginny (Steel) emerges as a final girl, ready to do battle with Jason. She discovers a hut in the woods where Jason has apparently been hiding out for years, building a shrine to his dead mother with her severed head and articles of her clothing. Ginny uses these to imitate Mrs. Vorhees, tricking Jason into letting his guard down so that she can attack him, wounding him enough to make her escape. Ultimately, Ginny makes it out alive, but, like Alice, she is robbed of her sanity and sense of security. 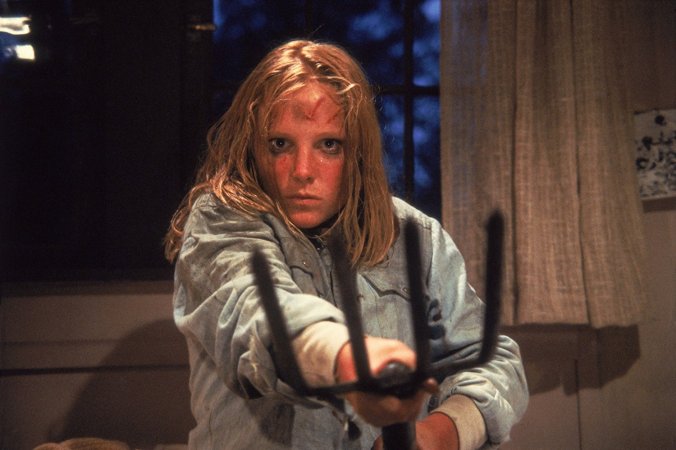 Aside from the first appearance of a mature Jason as the film’s killer, Friday the 13th Part 2 doesn’t offer much variation from the template established by the original film. This sequel exists solely as a cash-in on the popularity of the original film, and it isn’t surprising that most of the creative team behind the original opted not to participate in the series moving forward. Some of the movie’s kills stand out, and the body count is escalated, but there is little innovation or evolution in this entry in the series. In fact, Part 2’s narrative so severely retcons the original’s narrative to facilitate its own existence that it has been widely lampooned by both fans and creatives involved in the series’ initial creation. If, as this sequel posits, Jason had been alive the entire time, hiding out in a hut by Crystal Lake, why didn’t he simply reunite with his mother at some point? And, short of that, how did he survive alone in the woods for nearly three decades without being spotted by some camper, hunter, or other person? I don’t always look for strong narrative continuity in slasher films, particularly in hastily thrown together sequels, but this level of narrative implausibility is really hard to look past. Not only does it not further the Friday the 13th canon, it severely disrupts it, opening up the rest of the series to an escalating chain of narrative disruptions and flimsy excuses to return the infamous Crystal Lake killer from the dead. The film gains points for being the first to introduce Jason, an iconic horror figure who has become larger that the franchise itself, but it’s hard for me not to wonder what the creative brain trust behind the original film could have done together if the series had moved in the originally intended direction and abandoned the Crystal Lake setting altogether in favor of a new tale of terror. As it stands, however, Part 2 moved the film in a direction that would see it largely recreating the same scenario over and over again with slight variations on the setting. 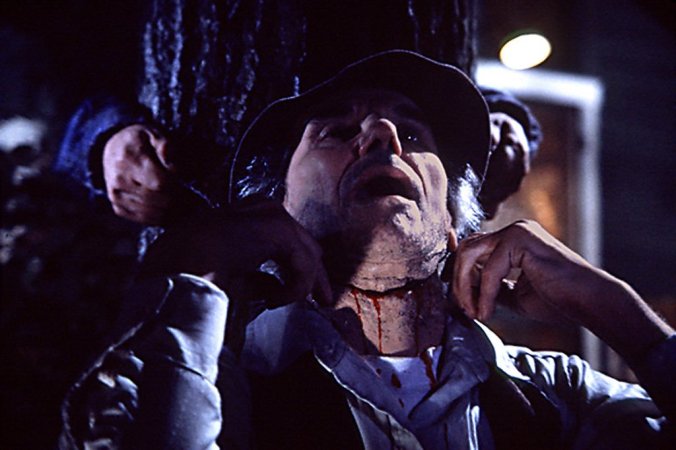 There isn’t much else to say about the film. Its cast of characters is largely indistinguishable, even more so than in the original, serving only as fodder for Jason’s homicidal rampage. Characters stand out for a few physical traits, perhaps, such as one counselor who is confined to a wheelchair, and another who is obviously cast as the camp clown, but they’re otherwise simply bowling pins set up to be knocked down in, admittedly, entertaining and clever ways by Jason and his array of sharp and pointy objects. The dialogue and performances in the film are laughable, as should be expected for a slasher of its type. Overall, this sequel has the feeling of being scraped together quickly to cash in on the success of its predecessor and to establish the long term viability of a franchise centered on the character of Jason Vorhees. In those respects, it’s a film that is successful. It pays some fealty to the original with its extra-long precredit sequence involving Jason returning to murder the heroine from the first film, and then splits off on a new, if nonsensical, parallel track from which the ensuing sequels would spring. For better or for worse, Friday the 13th Part 2 established the now familiar paradigm in slasher franchises that the killer can be brought back from the dead for any reason or no reason at all, as long as audiences seem willing to plunk down their hard-earned cash at the cinema box office. It certainly isn’t the worst film in the franchise, but it doesn’t hold up favorably to the original for me, simply because it hews so closely to the structure and plot of that film. It gains a few points for introducing Jason, albeit without his iconic hockey mask, but it’s largely too redundant of a movie for me to want to give it much time or attention. The original packs a similar amount of scares and has an air of novelty about it, and Jason would be given better films to terrorize later in the series, so despite its importance in changing the direction of the franchise, Part 2 feels largely extraneous to me.