I decided, for the sake of brevity and completion, to include both Friday sequels in this post, rather than doing a full write up for Friday After Next and then coming back to Next Friday sometime next year when I get to its place in the alphabet. The movies are fairly similar, featuring some familiar faces from the original, as well as a few new characters, and I honestly don’t know that I would have had enough to write about each movie individually to warrant full posts on them. Both of these sequels have their moments, but neither can hold a candle to the original movie, and I don’t have a particular nostalgic attraction to either of them, despite having seen them both in the movie theater and having watched them each multiple times. I came to own the Friday sequels because it was less expensive for me to purchase a three-disc-set with all of the movies rather than buying Friday by itself. Since I now own the movies, I’ve watched them both, but I don’t return to either one with any regularity. The original Friday is a mainstay in my comedy rotation, but neither of its sequels have the comedic consistency and satisfaction to keep me coming back very often. 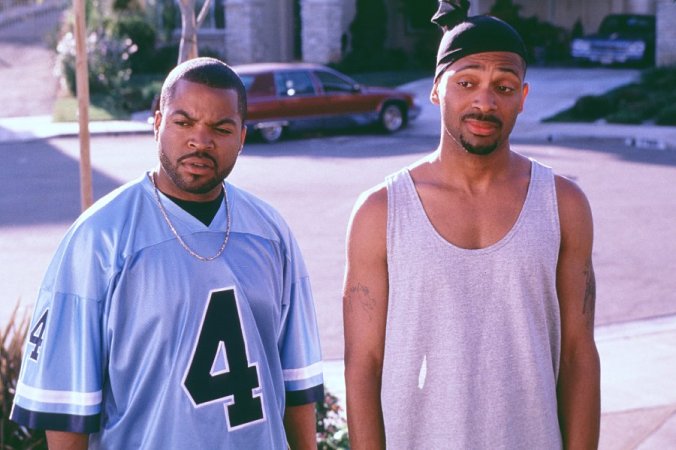 Next Friday sees Craig (Ice Cube), still unemployed, moving in with his Uncle Elroy (Curry) and cousin Day Day (Epps) in the suburbs after Deebo (Tiny Lister), the villain from the original film, breaks out of prison swearing revenge on Craig for getting the better of him in the previous film’s climactic fight. Though he leaves the hood, Craig’s problems seem to follow him, as he and Day Day run afoul of the Joker brothers, a family of Mexican gangsters who are Day Day’s neighbors. Meanwhile, Craig finds out that Day Day and Elroy’s million-dollar home, bought with their lottery winnings, is going to be sold at auction if the family can’t come up with money that they owe in back taxes. The cousins devise a plan to rob the Jokers, but things quickly go south, and soon the whole family, including Craig’s dad, Willie (Witherspoon), are involved in the heist. Unbeknownst to him, however, Willie has delivered a secret package to the suburbs, as Deebo has stowed away in the back of his dog catcher’s truck, hoping that Willie will deliver him to Craig so that he can finally get his revenge.

In Friday After Next, Craig and Day Day, along with the rest of their family are back in the hood, and getting ready to celebrate Christmas. The film opens with Craig and Day Day’s apartment being burglarized by a robber dressed like Santa Claus who steals all of their rent money. The movie primarily takes place in a strip mall where the cousins have gotten temporary jobs as security guards and where Willie and Elroy have opened up a barbeque restaurant. While Craig and Day Day patrol the strip mall, hoping to earn enough money to replace their stolen rent, they encounter a whole new cast of characters. However, their tenure as security guards doesn’t last long as they’re run off the job by some tough guys whose grandmothers Day Day kicked out of the strip mall for loitering. When they lose their jobs, the cousins decide to throw a rent party and their family, as well as all of the oddballs from the strip mall, attend, helping them raise enough money to pay the rent. In the end, the cousins are also able to catch the robber, reclaiming their Christmas presents and their money, and leaving him in his Santa suit, gagged and bound to a chimney. 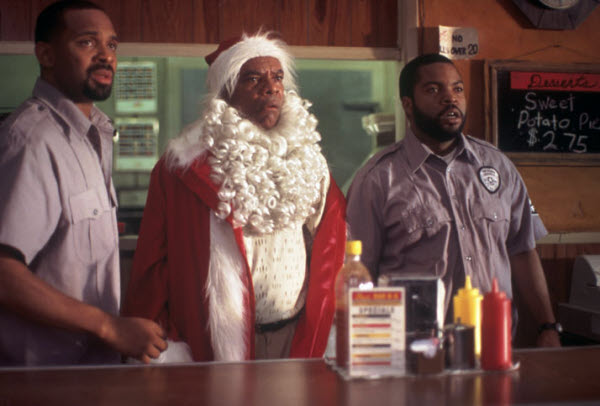 The sequels are largely very similar to Friday, with all three films revolving around Craig’s need to acquire some small sum of money, getting dragged into schemes by his friends and family, and hooking up with a beautiful girl by the end of the movie. All three films also feature deep and talented casts of comic actors, both up-and-coming and established, but the biggest thing that the sequels lack in comparison to the original movie is the presence of Chris Tucker. Tucker didn’t sign on for the Friday sequels, so his character, Smokey, was conveniently sent off to rehab and Epps’s Day Day stepped into the role of Craig’s friend and sidekick in Next Friday. Tucker was the break out comedic star of Friday, and, as I wrote last week, he was the engine largely driving that film’s humor. Day Day is a funny character, and he certainly has scenes in both films that generate some good laughs, but Smokey was iconic, and the sequels suffer heavily without Tucker’s energy. Epps has a much more laconic comedic style and the dynamic between he and Ice Cube simply doesn’t carry the same charge that Tucker and Cube developed in the first movie. Though the Friday franchise turned Ice Cube into a media mogul, he never really developed much chemistry or timing as a comedic actor. He maintains a laid back delivery throughout, playing the straight man, but Epps doesn’t turn in an energetic enough performance to recreate the other half of the buddy dynamic successfully. The two actors both manage to have memorable scenes here and there throughout the sequels, but without Tucker’s humor tying the films together, the Friday sequels never become more than the sum of their parts, and often seem directionless, with the plots meandering from one contrived point to another. 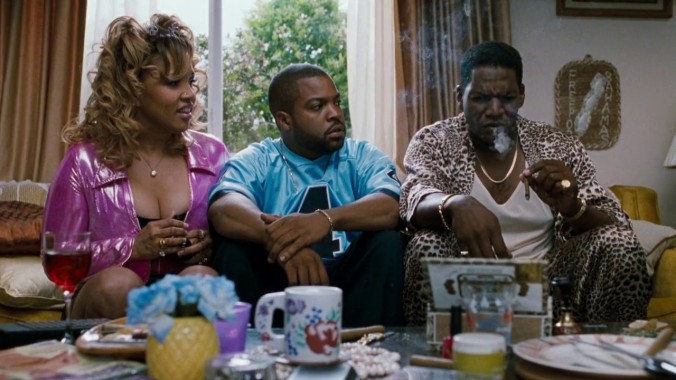 This is particularly apparent in Next Friday, as the film is largely built around the relationship between Craig and Day Day and eschews some of the ensemble casting that was so successful in the original film. With Cube and Epps still feeling out their comedic partnership, Curry, Witherspoon, and others are asked to provide the lion’s share of the laughs, but they aren’t given nearly enough screen time to do so. Another problem is that most of the new characters who are introduced in the supporting cast are too one-note, and often they’re little more than racist caricatures. While no one would accuse Friday of being the most intellectually stimulating film ever made, Next Friday too often goes for low-hanging fruit, settling for offensive or tasteless jokes rather than trafficking in the well-established observational comedy style of the original movie. While Friday felt like a genuine slice of life, an opportunity to take a brief glimpse into one day in Craig’s life, Next Friday feels like a hastily penned series of comedy sketches, with Craig and Day Day being shoehorned into one implausible and unfunny scenario after another. The movie has a handful of moments, and a few lines here and there that for some reason are ingrained in my memory, such as Day Day trying to pass of his obviously small rims as 20s early in the film, but on the whole, I think that Next Friday is the weakest movie in the franchise. It fails to integrate its new characters into the universe gracefully or to continue the successful formula of the original, taking instead a more cartoonish approach to comedy.

Luckily, in Friday After Next, it seems that the creative team learned a few lessons from the failures of Next Friday and opted to steer the franchise back in a more familiar direction. The film returns the family dynamic that was missing from Next Friday (despite featuring more members of Craig’s extended family) by beefing up Witherspoon’s role, and by reintroducing the character of Craig’s mother, played again by Anna Maria Horsford. The strip mall also functions in a similar way to the block on Friday, giving the film a much more observational feel. Again, the audience is able to be a fly on the wall as Craig lives through another crazy Friday, and gets to meet a new set of eccentric characters in the process. Katt Williams headlines the supporting cast, playing a pimp named Magic Mike who is trying his hand at opening up a retail clothing store. Terry Crews is also a highlight, as he almost always is. Crews’s character, Damion, has recently been released from prison, where he picked up a taste for forced sodomy, and he and Williams share one of the funnier scenes late in the movie. Ice Cube and Epps seem to be more comfortable in their onscreen chemistry, and whether that’s the result of them having more experience working across from one another or from having a stronger ensemble cast to take some of the comedic burden off of their shoulders, the movie is better off for it. Friday After Next leans heavily on physical comedy, more so than even its predecessor, and it sometimes feels outdated and a bit offensive, but not nearly as much so as Next Friday. The movie largely feels like a Christmas-themed rehash of the original, and though it certainly doesn’t stack up favorably when compared to Friday, it’s a step in the right direction after Next Friday’s wrong turn. 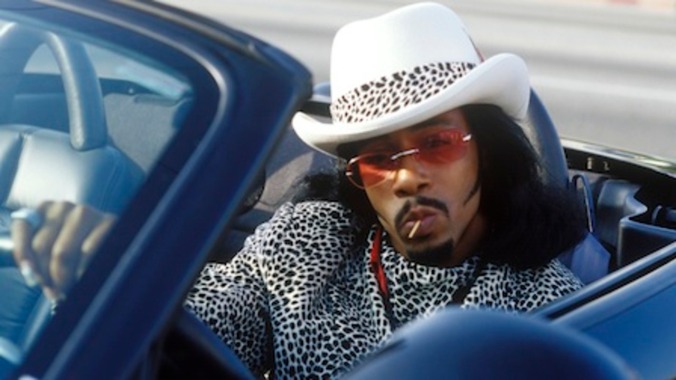 Overall, I doubt that I’ll be checking out Next Friday anytime soon, but there’s a chance that I decide to dust off Friday After Next sometime later this year when I want to get in the holiday spirit. While it won’t ever be a go-to movie for me like Friday, the third installment in the trilogy is a serviceable enough studio comedy. Its laughs are mostly cheap, but at least they’re there, which is often more than I can say for Next Friday, which almost entirely fails to move the needle on the humor scale. The franchise probably shouldn’t have continued without Tucker, but it did move on without him, and after a bit of fumbling in its second installment, Ice Cube and the cast manage to nearly stick the landing with the current final installment.

There is a fourth Friday film currently in the works, with Tucker’s involvement reportedly not totally ruled out at this point, and I’d be lying if I said that I wasn’t going to go see it, whether or not he ends up reprising his role as Smokey. I love the original movie so much that I’m willing to at least extend the benefit of the doubt to future installments of the franchise. If it ends up being made, the upcoming sequel might well end up being terrible, but even if it is, my fervor for the original won’t be quieted anytime soon. When it’s a Friday, and I ain’t got no job, and I ain’t got shit to do, I’ll likely just opt to pop in the original Friday, but having the option to watch Friday After Next once in a while isn’t bad, either.