“Which came first, the music or the misery?” This maudlin bit of dialogue opens High Fidelity, and it came to be something of a mantra for me in my teen years. I imagine that there were quite a few young, nerdy, socially maladjusted misanthropes who took Rob Gordon’s words and neuroses to heart after seeing High Fidelity. It seemed like the perfect movie for me at 15 or 16 years old, justifying my obsessive interest in music, movies, and pop culture ephemera. Though Rob is certainly meant to be seen as a shallow, narcissistic protagonist, one who can even identify those qualities in himself, I consistently misread the film’s message as a young person. By my late teens, I think that I started to understand the film’s third act, in which Rob starts to accept some responsibility for his own shortcomings and becomes a better person and partner, but I still saw more of myself in the Rob of the early film, who is so wrapped up in the minutiae of collectorship and curation that he fails to fully form a personality for himself. Watching High Fidelity in my thirties is almost cringe-worthy, as it reminds me of my early attempts at romance, of the person who I was nearly twenty years ago, but it’s also a powerfully nostalgic trip that does provide some wistful smiles and laughs. 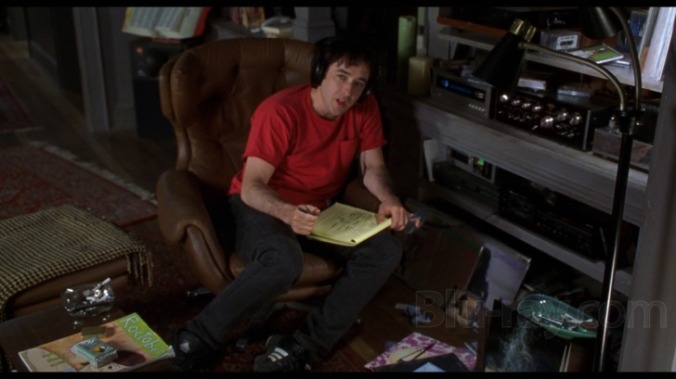 The movie opens with Rob Gordon (Cusack), fresh on the heels of a break up with Laura (Hjejle), trying to take stock of his life and his failed relationships. On the cusp of middle age, Rob is more grown child than man, defining his personality and interpersonal relationships through his encyclopedic knowledge of music and pop culture. Rob has parlayed this knowledge into a job running his own record store, Championship Vinyl, where he spends his days trying to impress customers and one-up his fellow music-nerd employees, Dick (Todd Louiso) and Barry (Jack Black). Rob’s self-examination takes the form of an exhumation of his loves and losses, Top Five style, as is his wont throughout the film. We see Rob grow from an immature, elitist, young hipster, into an immature, cynical, older hipster and along the way meet some of the women who he blames for turning him into the self-loathing, but still self-obsessed, ball of neuroses and music trivia that he is. Eventually, Rob’s soul searching brings him back to Laura, and the two reconcile as she tries to rekindle not only the spark in their relationship but in Rob’s personal life, as well. High Fidelity finishes up with a conventionally happy ending, but its always struck me as fraught with uncertainty, much like the ending of The Graduate. 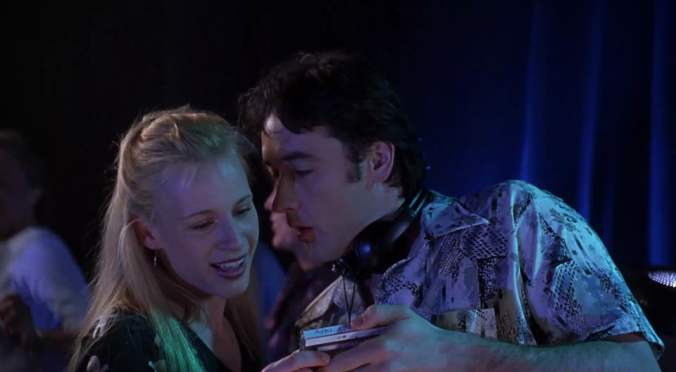 I’m probably being unfair to Rob as a protagonist, but that’s only because I can sometimes see so much of my younger self in his character. As I mentioned, High Fidelity was an early touchstone for myself, and I embraced its esoteric hipster-dom. It was the movie that made me feel ok to be as wrapped up in music and movies as I was as a 15-year-old kid, but I think that it also gave me a pass to become too maudlin and too self-involved for a while in that period of my life. There’s only so long that you can substitute depression, teenage alcoholism, and a record or movie collection for an actual personality. Rob is a prick when we meet him, a prick in his own remembrances, and he remains at least a bit of a prick until the movie’s end, when he does manage to, at least partially, redeem himself by embracing a more healthy, positive outlook on life. I think that I stopped watching High Fidelity almost entirely after my high school years simply because it was too difficult to stomach Rob’s elitism and moping. His attitude reminded me of a phase of development I was desperately trying, and often failing, to grow out of. Ironically, if anything, I probably became more of an ivory tower elitist in college than I had been in high school, although I couldn’t see that particular forest for the trees of academia that were surrounding me.

But still, uneasy self-revelations aside, I found a lot to enjoy about High Fidelity watching it for the first time in at least a dozen years. While Rob might not be an easy guy to root for or sympathize with, High Fidelity is an easy movie to settle into and enjoy. It’s light and funny, it has a fittingly great soundtrack, and the grand gestures of love depicted in the movie seem perfect to its target audiences of young people and hopelessly romantics. I’ve never been a big fan of traditional romantic comedies, but High Fidelity injects enough pessimism and cynicism into its saccharine core that it avoids turning my stomach. The movie walks the line between loathing and loving, and it depicts the balance between the two sentiments as existing within all of Rob’s relationships, including the one that he has with himself. That seems like a much more honest depiction of love to me than most romantic comedies of the early 2000s were peddling. By the film’s end, Rob and Laura are in love again, and, while it’s not difficult to envision a future where they really do share a fairytale happy ending, it’s more likely that their relationship will continue to be defined by the careful balance of their very different, but complimentary, personality types. Throughout the film, Rob’s relationship with Laura was shown as having elements of humor, affection, contention, and understanding, depths that clearly aren’t represented in any of the previous relationships that he posthumously examines for clues as to his failings. That depth is what builds a strong and lasting relationship. I like that High Fidelity depicts this sort of relationship as a continuous work in progress. It feels genuine and affirmational, especially when that work leads to an ecstatic moment such as the one depicted in the film’s musical finale where Rob proposes to Laura. It’s a really good scene and it feels like a great payoff for the cast of characters who have all grown in some way. 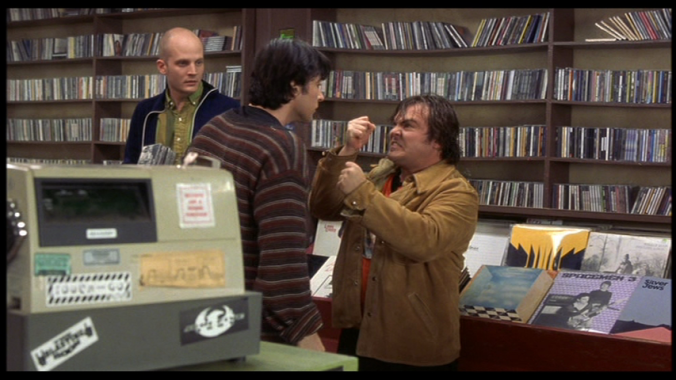 I’d also kind of forgotten what a pleasure the supporting cast of High Fidelity is to watch. Jack Black’s performance in the movie always sticks out in my head, and certain line deliveries of his tend to pop up in conversation for me still, but I had forgotten how much of his humor is drawn from the perfect interplay between his character, Barry, and Todd Louiso’s Dick. The two actors are perfectly paired, with Louiso embodying the introverted, nerdy stereotype of the record obsessive, while Black’s Barry is the brash, know-it-all music nerd. I’ve known several people who fit into both sides of this stereotype, and the actors chosen are perfect for their roles. Louiso lurks quietly in the background of scenes, mumbling lines both pithy and sincere, and, seemingly in compensation, Black’s mania is ratcheted up to 11, with the actor dancing and bouncing through the record store, while bursting into gleeful song. Both characters are genuine and fun, and it’s a pleasure to watch them grow a little bit throughout the movie, with Dick finally getting a date with his crush and Barry finally getting to sing in a band, by the film’s end.

On a similar note, Lisa Bonet deserves acclaim for her role as Marie de Salle, a musician whom Rob develops a crush on while he and Laura have split up. Bonet also feels genuine, tapping into her sensuality and performative streak when Marie is on stage, but revealing a natural, fun side to the character when she’s off it. Marie feels real in a way that none of Rob’s previous girlfriends have, and I attribute much of that to the inherent warmth in Bonet’s performance. She exudes coolness, but also caring, seeming to develop a real connection with Rob in just a short period of time. She also nails her performance scenes, and the cover of Peter Frampton’s “Baby, I Love Your Way,” still sticks in my head sometimes. Overall, I think that High Fidelity shortchanges most of its female characters because they’re being imagined through the prism of Rob’s post-breakup mindset, but Marie de Salle is allowed to exist fully on her own terms as a character, and Bonet brings that character to life vibrantly. 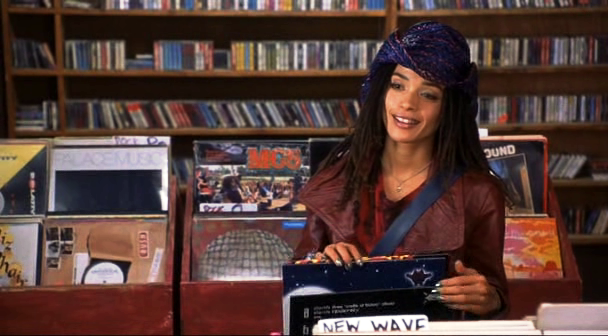 I found this rewatch of High Fidelity to be something of a mixed bag, which is a fairly common theme among the movies in this project. Sometimes art that we love when we’re young doesn’t age so well, but High Fidelity is largely as I remember it, for better and for worse. I suppose that it’s fitting for me to have such a nostalgic affection for a movie that is so obviously steeped in nostalgia already. The laughs and the funny characters are just as I remember them from so long ago, but part of those characters being just as I remember them means that I’ve also largely outgrown them. A movie that I used to strongly identify with has become one that I merely enjoy, and even then I doubt that High Fidelity is a movie that I’ll be pulling off the shelf again any time soon. When it’s good it’s really good, and it still brings a big smile to my face, but the movie also feels incredibly dated, not just in its content but in its style, as well. High Fidelity has more in common with studio romantic comedies from earlier than it does with newer, more interesting movies like Her. This isn’t a terrible thing, because High Fidelity largely delivers on the promises of its genre, and, as I mentioned, I think it presents a realistic and relatable portrayal of romance, but it does mean that the movie was far less influential than I probably felt like it was, or should be, when I was 15 years old. That’s probably a good thing, though.