Her is one of the most recent movies in my collection, and it’s one of the very last movies that I ever purchased on home video. By the time Her came out on DVD in May of 2014, I was already primarily consuming all of my media through streaming services. My DVD collection had seldom grown in the past couple of years, but I was compelled to add this particular movie to my collection. Despite knowing that with the breadth of streaming services and premium channels available to me, I could likely dial up a popular, recent movie like Her at any time, I needed to own it. Such was the impact that this movie had on me when I saw it in the theater in early 2014, after having just experienced a recent minor heart break. I clung to the movie after that first viewing, declaring it one of my favorites of 2013, a year in which I made it a point to see a great many of the critically-acclaimed films. In the weeks after seeing Her, I played over small moments from the film in my head, comparing them to my own experience of loss. Admittedly, nearly five years later, watching the movie again I realize how short-sightedly maudlin my initial appreciation of it might have been, but I still find Her to be a richly evocative movie that plumbs emotional depths and treats the audience to a sumptuous imagining of a tech-driven near future. Spike Jonze crafts a heartbreakingly beautiful love story in his first solo script, and he further explores the nuances of modern love that he explored in his early collaborations with Charlie Kaufman. It’s a lovely movie that I’m glad to have fallen in love with, even if it was for the wrong reasons. 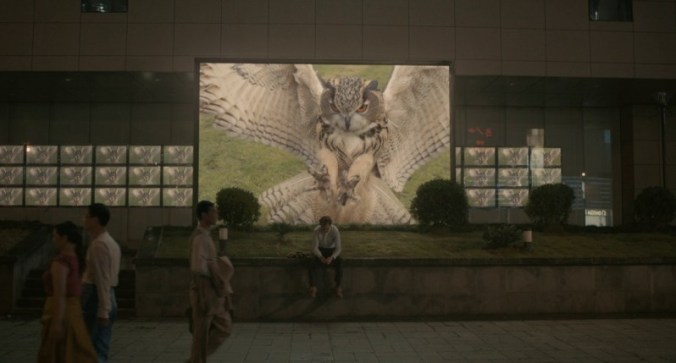 The titular Her is Samantha (Johansson), an operating system on a tablet with whom introverted, romantic, lonely poet Theodore Twombly (Phoenix) falls in love. Theodore lives in Los Angeles, sometime in the not-too-distant future, in a world in which people have become even more enamored with their PDAs and other screened devices. Theodore is adrift in this impersonal world, still reeling from the dissolution of his marriage over a year ago, working a dispiriting job in which he pens happy couples’ love letters for them. He has alienated his few friends, including his close friend, Amy (Adams), preferring to spend his evenings alone with his personal assistant and his video games. That all changes, however, when Theodore’s, and everyone else’s, computers are updated to feature a new artificial intelligence-based operating system that will function as a personalized virtual assistant and colleague. Theodore’s OS names herself Samantha, and, within a matter of weeks, the two have sprouted up first, a friendship, and then, an uneasy romance. Though it lacks the physicality of a traditional romantic relationship, the bond that Theodore and Samantha form is emotional and real, and the affections that the two share for one another are, too. Samantha is the coolly unattainable, but imminently approachable woman who Theodore desires, and Theodore provides a human outlet for Samantha to begin to experience the world. Inevitably, though, Samantha, with her computer brain’s limitless ability to expand and process experience and information, begins to outgrow Theodore. He is left devastated, trying to pick up the pieces of a relationship that, on the surface, seemed so immaterial.

The premise of Her would be laughable if we weren’t in a pervasively digital era, in which people are free to meet and bond online, sharing mutual interests and experiences. In the age of online dating, long distance relationships, and catfishing, meeting someone on the Internet and allowing a friendship or romantic relationship to bloom has become extremely commonplace. Jonze simply takes this idea and stretches it to its most extreme iteration, essentially crafting a love story in which a man falls in love with a personification of the Internet itself. It’s conceptually daring and high-minded, to be sure, but at its root, Her is a fairly conventional love story. Theodore and Samantha form an unlikely pair, but the stages of their courtship would be familiar to anyone who has ever fallen in love, and the ups and downs of their relationship are blissfully and painfully real. Jonze is careful to depict their love as being rooted in deep and true emotions, rather than some tech fetish, as he allows the audience to contrast Theodore and Samantha’s relationship with Theodore’s unsuccessful attempts at connecting with real humans through virtual means. Their relationship is certainly untraditional, but it seems almost quaint in its simplicity and earnestness, and in the unabashed love that the two exhibit for one another.

This central relationship wouldn’t ring as true, though, without the stellar performances of Phoenix and Johansson. I don’t know that I had really recognized Johansson for the great actress that she’s become until I saw Her. I had often enjoyed her performances in movies that I’d seen her in, but her performance as the disembodied voice of Samantha elevated her status as an actor in my mind. Through a purely vocal performance, Johansson is able to fully flesh out Samantha’s character and personality. Her vocal inflections and expert timing lend a layer of humanity to the OS that feels slightly unnatural, at first, but then becomes unmistakably warm and inviting. She gives Samantha sass, feeling, and depth. Her performance is memorable, and it made me realize just how unmistakable her voice is. She plays Samantha as coy and playful, but also vulnerable, searching for meaning and identity. Jonze’s excellent script helps to provide Samantha with some of her layers, but its Johansson’s performance that truly brings the character to life and turns her into a relatable, sympathetic presence.

Theodore is a somewhat thornier character, not entirely sympathetic, but played to excellent pathos by Phoenix. I’ve long felt that Phoenix was a great artist, and I think that in time he’ll be recognized as one of the best actors of his generation. He is able to shift seamlessly from character to character, channeling different facets of the human experience for each role. The change up in demeanor that he shows from a signature performance in The Master, released just a year before Her, is indicative of the range that he possesses as an actor. Gone are the outbursts and the primal, animalistic rage that he displays in the latter film, replaced here with a gentleness and a reticence previously unforeseen. There’s a bit of the everyman in Theodore, but his social development is stunted just slightly from the trauma of his failed marriage, and Phoenix displays this interiority subtly and masterfully. Though he spends much of the film closed off, watching Phoenix unfurl his easy smile as Theodore’s world begins to open up through his relationship with Samantha is one of the film’s small pleasures. Once his walls begin to come down, Phoenix plays Theodore with a weightless, if nerdy, charm. Theodore is a somewhat unlikable character, prone to self-defeat and neurosis, but it’s hard not to be won over by Phoenix’s nuanced performance. 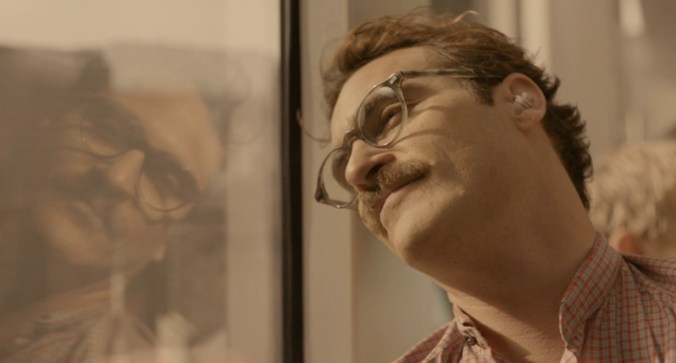 Jonze creates a sumptuous visual world for his characters to inhabit. The Los Angeles that he imagines is familiar, maybe a decade or two advanced beyond our world, but filled with just enough technological advances and novelties to give it a sense of whimsy and wonder, placing the film squarely in the realm of speculative fiction. Technology in Her is pervasive but never insistent. Jonze uses screens and virtual reality to give us a glimpse of life in his near-future, but they are merely the window dressing on the human love story that he wants to tell. Technology exists all around, and as such, its presence doesn’t hamper Jonze’s desire to explore a breezy, sun-splashed world. The exteriors of Her are bathed in warm light, and Jonze uses a summery color palette full of warm hues that reflect the film’s inherent romanticism. A love story between a man and an operating system could certainly be an interiorly-focused film, and one without many humanistic touches, but Jonze’s direction and mise-en-scene breathe warm life into Her. Much like in his work with frequent collaborator Charlie Kaufman, Jonze’s visual work provides a grounding and inviting element to a script that could otherwise become esoteric and inaccessible.

Her is a movie that still feels incredibly real and raw when I watch it. I’ve watched and rewatched it a half dozen times in the last few years, and though I’ve grown past the disappointment that I was feeling from a rejection on my initial viewing, it’s a movie that manages to make me feel emotions that few others can. A beautiful relationship, whether it be romantic or platonic, should be about growth and learning, and supporting a partner as they grow and learn, too. The only thing constant in life is change, and as humans we are always changing and growing through experiential learning. In Samantha’s awakening, Her depicts exactly the sort of growth that we should all hope for our partners, but it also accurately depicts the pain that can be caused when one half of a partnership outgrows the other, or grows in new and different directions. Love can be scary, and it can be beautiful, and it can feel immensely overpowering, opening up new experiences and ways of being, and I think that Her captures all of that perfectly. It’s a movie that calls into question what it means to feel, what it means to be human, and it finds the core of humanity in the desire and ability to connect. That connection can be physical, emotional, intellectual, or spiritual, or, at times, all of the above, as we see in Her through Theodore and Samantha’s relationship. It’s an earnest and honest movie, one that isn’t afraid to wallow in the depths of sadness and explore the dizzying heights of euphoric love, and it’s a movie that I likely won’t ever tire of returning to when I’m looking to feel affirmed of my own humanity.