Good Night, and Good Luck. came out at a time in my life when I was rapidly expanding my viewership. In 2005, I was starting my second year of college in Pittsburgh, and I was diving deeply into the Film Studies program at Pitt, filling my schedule with courses that required constant engagement with cinema and encouraged me to explore filmmakers, genres, and national cinemas that I otherwise wouldn’t have considered. I spent that year of school living alone in a single room, in a dormitory where it seemed no one was particularly interested in socializing or meeting a new friend, so I turned, instead, to my movies, watching three or four in a day sometimes. I signed up for a Netflix account and attempted to maximize the efficiency with which I could receive, watch, and return those little red envelopes and the discs inside of them that contained a passport to other worlds. I watched a half dozen movies every week just for the classes I was taking. I rented as many DVDs and VHS tapes as I was allowed every single week from the Carnegie Library’s impressive collection. All the while, I still managed to find the time to make it out to the theater to see the latest new releases, both popular and independent. It was something of a solitary year for me, but it was also a year in which my interests and tastes in movies began to crystallize, and during which my dedication to a scholarly pursuit of the movies was strongest.

I say all of that to illuminate the point that while I was spending so much time collecting stories and images, there were certainly moments where I caught lightning in a bottle and experienced a film that would stay with me for years and through which I would gain a better understanding of the medium and of myself, there were other films that simply didn’t stick and whose plots and characters have been lost in the shuffle entirely, and then there were films that felt incredibly impactful to me at the time, but which have proven not to have the staying power that I assumed that they would. Though I think that it’s an enjoyable, and somewhat important, film, Good Night, and Good Luck. largely falls into this latter category. 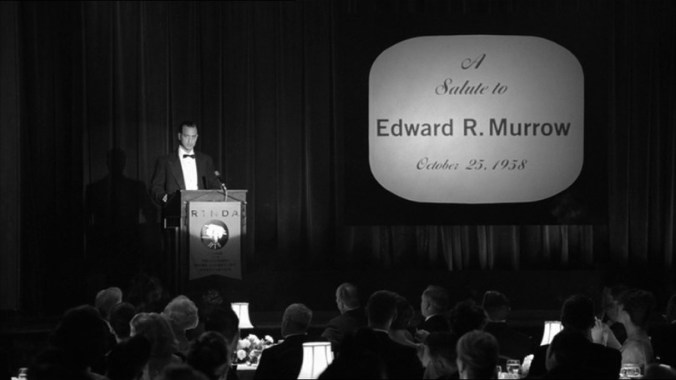 Relating the true story of CBS journalist Edward Murrow’s (Strathairn) public feud with notorious U.S. Senator Joseph McCarthy, Good Night, and Good Luck. is a stylish, artfully produced period piece. It’s the type of film that seems destined for mainstream award recognition, an Important Drama, and it was rewarded with several Academy Award nominations, but no wins. It’s a film that is designed, with its star-studded cast, serious subject matter, and black and white cinematography, to be appreciated as a serious work of art, but one that stops just short of truly challenging its audience, at the same time. Seeing the movie in the winter of 2005, I felt that Good Night, and Good Luck. was an immensely important movie, and one of high quality, and while it certainly is quality entertainment, its vitality seems to have faded over the course of a decade, and like many other prestige films, its brief run as a must-see movie seems to be all but forgotten. I don’t mean to deny the film any of its artistry, or to suggest that the telling of Murrow’s insistence on speaking truth to power is any sort of frivolity, but there is something about going back to watch this type of prestige film from the mid-2000s that feels absolutely quaint to me. As a commentary on the role of journalism, the film might be more prescient in 2018 than it was in 2005, but watching it again after not having seen it in so long I couldn’t shake the feeling that Good Night, and Good Luck. is simply the product of a radically different time. That’s really neither a bad or good thing, but a truth about the rapidly changing nature of studio cinema, and something of a reflection on my own changing habits as a movie-watcher now compared to 13 years ago.

What I mean by the first part of that last statement is that shortly after the release of Good Night, and Good Luck., models of distribution began to change radically, as did the consumption habits of the public. Home video was in its heyday and streaming services were beginning to emerge on the horizon, giving audiences access to more and more content in their own homes. The subsequent, relative leveling of the distribution playing field was a definite blow towards the idea of a monoculture, and a single taste-making entity, such as the Academy of Motion Pictures and Sciences, that acts as an imprimatur of filmic quality. In the age of Internet streaming and distribution, the content consumer reigns supreme, with a plethora of viewing options at her fingers. With so many services designed to satiate every individual artistic taste, the idea of prestige films that audiences and the industry rally around is an idea that exists largely in think pieces such as this one, rather than as a reality in practice. These films are certainly still being made, distributed, widely seen, and lauded with awards, but their impact and importance seems more fleeting by the year. One such film, Spotlight, which bears many similarities to Good Night, and Good Luck., was awarded the Oscar for Best Picture recently, and it is a fine movie that tells a story that deserves to be told. However, when it comes to rewatchability and cinematic importance, to me, it doesn’t hold a candle to other memorable films from that year, including Tangerine, Anomalisa, and Carol. Aside from Tangerine, these are somewhat high-profile, mainstream indie movies, but I think that they are also movies that likely wouldn’t get distribution in 2005. Their success is contingent on a shift in the industry towards niche marketing, which isn’t new, but which has intensified thanks to the increased accessibility offered by alternative distribution models.

As to my own personal viewing habits having changed, I’m not nearly as consumptive of media as I was in 2005. To be honest, I really haven’t been since that time, which is probably a good thing in most respects. While I do still try to eventually see major awards contenders, my limited available time to consume movies necessitates being much more choosy than I was in the past. Trips to the theater are limited for the movies that I really feel I must see immediately upon their release, or the type of blockbuster action movies that really benefit from a viewing experience on the big screen. I do the bulk of my movie watching at home, and I subscribe to a plethora of different streaming services which provide me with a pretty wide range of new release and classic movies. I watch whatever I want to watch when it becomes available, largely unaffected by the cinematic zeitgeist, because so frequently I’m watching these movies a year or more after they were released in theaters. The experience of watching Good Night, and Good Luck. seemed vital in 2005, so much so that I felt the need to purchase the movie on DVD after having seen it in the theater, but only a decade later, Spotlight received little more than a cursory watch on a Redbox disc on a random, snowy Tuesday night. This divorce from the prestige picture as a theatrical event in my life has shifted my attentions towards movies that might otherwise have gone under my radar. Just like studios keep making safe, awards-friendly fare, I still watch these movies, but frequently in a fashion that is far removed from their moment in the cultural spotlight.

This post is obviously short-changing Good Night, and Good Luck. which is actually a pretty good movie. I think that its level of cinematic artistry rises significantly above that of many films in the “Oscar bait” category, which is a term that I think I’ve danced around a bit here. The cinematography is beautiful, and Clooney makes an interesting directorial decision to include actual footage of McCarthy, rather than represent him with an actor. Strathairn’s interactions with McCarthy’s image, which is seen on television screens, which abound throughout the film, have an odd quality that is at once truthful and false, piling levels of representation upon one another, creating some disorientation. Strathairn’s performance is powerfully understated, and it’s matched by great work from the rest of the film’s cast. As I’ve alluded to, the film, with its political commentary being matched by the realities of the world today certainly seems prescient and contemporary. In the era of “fake news,” a movie about a journalist risking his career to condemn and expose a hypocritical, cruel bully who found himself in a position of political power rings true, indeed. One of the purposes of this project was to explore movies from my past in a new context, and watching Good Night, and Good Luck. in 2018 certainly changed the way I think about that movie, but also it prompted me to think about the way that I relate to movies in general in 2018, versus the way I did in 2005. My world has expanded so much since then, and, luckily, so have my viewing options. In 2018, I long for a more varied cinematic experience, which is likely a consequence of my voracious media consumption in college. There’s still room for movies like Good Night, and Good Luck., which is to say, movies that are fine to good artistically, and which gain the mainstream approval of what is left of a rapidly dispersing monoculture, but there’s increasingly less and less so as new, and more varied, entertainments come streaming into my life.