I have been procrastinating and struggling with the idea of writing about Goodfellas for several weeks now. I’ve written before that I’m not much of a fan of writing about movies that I don’t like, but, sometimes, it’s just as difficult to write about a movie that you really love, one that’s universally accepted as a masterpiece, and that has been lauded to death already. I don’t know what more I could add to the conversation surrounding Goodfellas, a movie that is often brought up as a contender in the debate over the best films of its ilk, if not the best films of all time. There’s really no debating for me; Goodfellas is quite near the top of my personal favorites, and I think that it’s almost a perfect movie. It’s a combination of cinema as high art and as mainstream entertainment, an accessible masterpiece that absolutely builds consensus among almost any movie fans. When I was watching Goodfellas for something like the hundredth time to prepare for this post, I sent a friend of mine a message that simply said, “I could watch Goodfellas every day and be happy,” and that sentiment is absolutely true. It provides everything that I need in a movie, and though it probably isn’t my absolute favorite movie of all time, it would likely be my desert island movie pick.

Based on the true story of his involvement with the mafia, Goodfellas follows Henry Hill (Liotta) from his first forays into organized crime as a boy growing up in New York City, to his rise to the pinnacle of the criminal underworld. Along the way, Scorsese introduces a memorable cast of characters and details the inner workings of a well-oiled criminal empire. More than any other movie, including the most classic and lauded of all gangster films, Goodfellas acts as a thorough and immersive tutorial in the operations of the mafia. I’m largely dispensing with a plot synopsis for the movie not only because it’s a movie that anyone reading this post should already be familiar with, but also because its narrative has become the ür-text for the gangster film since its release nearly thirty years ago. The story of Goodfellas will be familiar to anyone who is familiar with the archetypal trope of the individual struggling to define and achieve the American dream, but it’s the telling that makes the movie so memorable. So many lesser movies have quoted and lifted from Goodfellas that it almost seems to have birthed the genre anew, and though it obviously owes a debt to the other giants of gangster cinema, it stands out as an original and vital push forward for the genre. 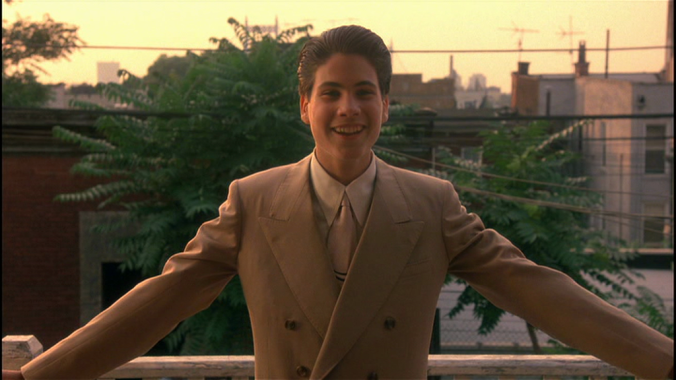 Clearly, Martin Scorsese was already established as a master by the time that he made Goodfellas, but this is a film that no doubt vaulted him into another stratosphere as a visual and narrative artist. The movie takes its audience on a 140-minute thrill ride, visually and aurally matching the opulence and the chaos that would come to define Hill’s life as he ascended through the ranks of an organized crime family. The film features the familiarly expressive camera work that would come to define Scorsese’s cinema, and the whiplash editing of longtime Scorsese collaborator, Thelma Schoonmaker, with both the cinematography and the montage combining to underscore the film’s haphazard narrative. Scorsese has also chosen to tell this tale episodically, condensing thirty years of action into a handful of vignettes that chart Hill’s rise and the increasing unraveling of himself and those around him. These directorial choices give the film a sense of urgency and immediacy, while the ever-present voice over narration lends it its credence and position of authority. While The Godfather is told as a grand epic of Shakespearean proportions, Goodfellas feels thoroughly modern, charting a similar story of criminal enterprise and demise, but doing so in a more engaging and more vital way. It’s a movie that eschews rumination in favor of dragging the audience along by the throat, forcing the audience to see and absorb, and, in essence, experience, the things that Hill is experiencing. When the movie does slow down a bit to let the viewer catch her breath, it’s typically in the form of a freeze-frame, highly constructed to hammer home some point or moment of great narrative import. Goodfellas is full of these and other cinematic visual tricks, a tour de force of image paired with narrative meaning, with Scorsese pulling out all the stops and incorporating every bit of cinematic flair he had developed to that point in his career.

Scorsese also assembles one of the best casts of any of his films, with Goodfellas combining a who’s-who of established actors, many of whom Scorsese had never worked with in the past, and a panacea of up-and-coming actors, who would go on to people the next generation of mafia media. Robert De Niro and Joe Pesci both turn in typically electric performances, with De Niro officially beginning a phase in his career where he started to play the elder statesman, and Pesci being rewarded with an Oscar for his unhinged performance as the ruthless gangster Tommy. Relative newcomer Liotta acquits himself well to a meaty and difficult role, aptly charting Hill’s physical and mental degradation throughout the course of the film. He is by turns charming and suave, and then haggard and harried, a life lived on the fringes of society having obviously taken its toll on his character. Hill is the closest thing the movie has to an audience surrogate, because even though he’s on the inside, he acts as a tour guide through this dark world and his engaging performance encourages the kind of identification that leads to the stomach-turning excitement of the film’s final act as everything starts to crumble around him and his family.

Lorraine Bracco deserves special mention for turning in a varied and stellar performance as Hill’s wife, Karen. Karen is an outsider when Hill first meets and approaches her, but Bracco never plays her as helpless or naïve, instead choosing to make her character uneasy, but ultimately tacitly approving of the madness unfolding around her. Karen is obviously taken in by the lavish lifestyle that Henry introduces her to, with the possibilities of life as a mobster’s wife literally unfolding in front of her eyes in one of the film’s most memorable scenes, as the camera charts an unbroken course through the Copacabana, showing Karen and the audience the kinds of pleasures that abound for those willing to bend a rule. Though she’s a wide-eyed observer, Karen is always aware of the work that her husband does to afford them their lifestyle, and soon enough her own character trajectory starts to mirror that of her husband. By film’s end, Karen is just as strung out and paranoid as Henry, and Bracco sinks her teeth into these later scenes, showing the once prim and proper Karen starting to come apart at the seams. Hers is a powerful performance in a film that largely relegates its female characters to the sidelines. My own history with Goodfellas probably goes back a little over 20 years. I’m not exactly sure when the first time I saw the movie was, but I can remember borrowing it on VHS from the library, probably sometime shortly after I had borrowed The Godfather for the first time. Because of the close proximity of my first experience to both movies, and I’m sure not unusually, these two classic gangster movies have always been inextricably linked for me. I really liked both movies at the time, and I still do, but when I was a kid, The Godfather reigned supreme in my opinion. That attitude shifted at some point in my teens and early twenties, when I started to recognize the importance and the style of the more modern, and, by that point, more influential Goodfellas. To me, it’s just a more engaging movie. Even though I have its lines of dialogue memorized and I can anticipate every great and memorable set piece, Goodfellas never fails to grab my attention and keep me locked in for the entirety of its runtime. Though I go to see every new Scorsese release in the theaters, Goodfellas is the only one of his classics that I ever go back to rewatch with any regularity. I need to be in a particular mood to want to sit through Taxi Driver or Raging Bull, but Goodfellas is always a welcome escape for me. There are better movies, though not many, in my opinion, but this is one that earns its place as my desert island movie because it so perfectly triggers every pleasure center that a movie can activate in my brain. Its narrative structure and pacing, the stellar performances of its cast, the attitude that the film has, its great soundtrack, all add up to one of the most satisfying movie experiences that I can treat myself to.