When I think back to the late 1990s, one of the strangest pop-cultural phenomena to me is the brief stint of massive popularity that Canadian shock comedian Tom Green enjoyed at that time. Green rose from obscurity in America in 1999 when MTV began airing The Tom Green Show, a continuation of a sketch/alternative comedy show that he had been hosting on Canadian public access television for five years. The show only continued production in America for about a year, ending its brief run due to Green’s diagnosis with testicular cancer, and culminating with a one-hour special in which Green and his family, who were the frequent targets of his anarchic pranks on the show, detail their reactions to, and attempts to cope with, the diagnosis. Despite its brief run, the show continued airing in syndication and Green continued to enjoy a modicum of celebrity into the early 2000s, including a short marriage to Drew Barrymore, a handful of post-cancer specials on MTV, and the release of Freddy Got Fingered, Green’s attempt at turning the madcap energy of his sketch show into a narrative feature film. Though he’s continued producing an internet show and making other small media appearances, Freddy Got Fingered, which garnered a cult following on DVD despite its box office failure and critical lambasting, remains Green’s most enduring work. 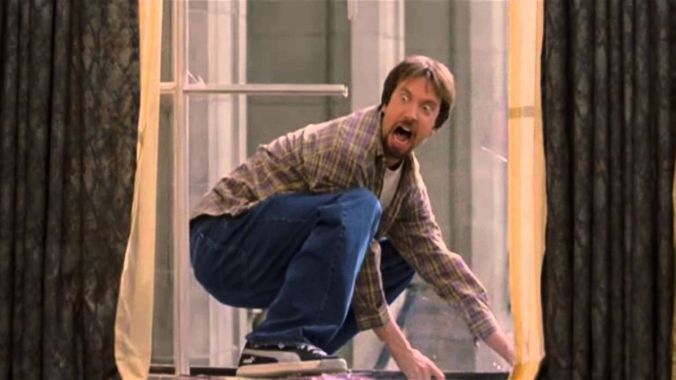 The movie, which echoes Green’s own relationship with his parents and struggle to break into the TV business, casts him as Gord, a 28-year-old slacker who still lives at home with his parents, Jim (Torn) and Julie (Julie Hagerty). The movie opens with Gord determined to leave their home in Oregon to chase his dream of being a successful cartoonist in Los Angeles. Gord arrives in L.A. and tracks down the head of an animation studio, Dave Davidson (Anthony Michael Hall), who rejects Gord’s drawings for their ridiculous premise, but tells him that he has skills as an illustrator. Gord returns home after being rejected, where his father belittles his attempts to chase his dreams and constantly harangues him to get a job. By chance, Gord meets a nurse, Betty (Coughlin), who is in a wheel chair, and who hopes to one day create a rocket-powered chair to help her overcome her limitations and achieve her dream of going fast, but their relationship starts to fall apart as the tensions between Gord and his father start to wear on all aspects of his life. After tearing his family apart by falsely accusing his father of molesting his little brother, Freddy (Eddie Kaye Thomas), Gord gives up on his dreams of becoming a cartoonist. He takes a job at a sandwich shop where he eventually sees a news report on Betty’s success building her rocket chair, and he is inspired to take up his pencil again and he returns to Hollywood to pitch a new idea to Davidson, a cartoon based on his relationship with his father. Davidson immediately picks up the cartoon and pays Gord a $1,000,000 advance, most of which he uses to relocate his family’s home to Pakistan, where he and his father are abducted and held as hostages, causing an international affair. The film ends with Gord and Jim’s safe return to the United States, where Gord’s cartoon has become a hit. 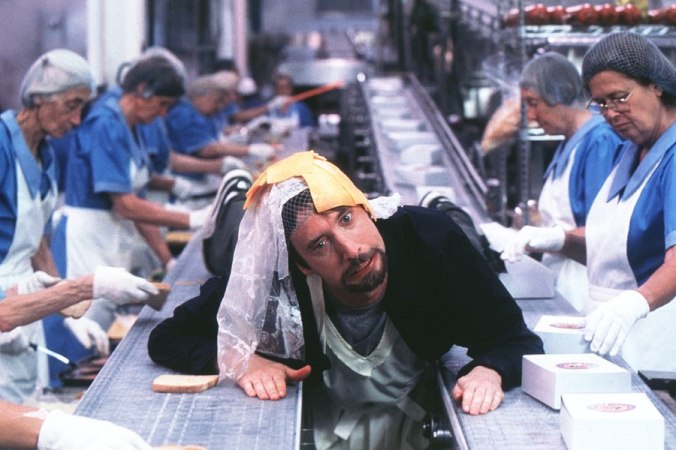 I summarized the entirety of Freddy Got Fingered’s plot as succinctly as I could, while leaving out some of the more bizarre and ancillary diversions, just to highlight the utter inanity of this movie. Freddy Got Fingered only follows the rules of narrative continuity in the most minimally applicable ways, basically functioning as one long, free-flowing non-sequitur. It’s a hallucinatory, challenging experience to watch, and I, personally, find it basically impossible to appreciate for any real “comedic” merit. Though I was a pretty big fan of The Tom Green Show on MTV, by the time Freddy Got Fingered came out, I had already moved on from Green’s style of provocative, gross out, anti-comedy. I know I saw the movie in the theater with my friends, but even at 16, I wasn’t a fan of Freddy Got Fingered. I found it to be excessive, gross, and unnecessary, and my feelings really haven’t changed very much after a decade and a half. I know that there has been a critical reevaluation of the film in the last few years, with several prominent critics categorizing the film as an interesting work of experimental cinema and performance art, and I think that there are likely grounds to examine the film in such a light, but I still have difficulty engaging with the movie in any way that doesn’t lead to frustration and slight disgust. Green insists on pushing the envelope throughout the film, daring his audience to laugh along with him as he lampoons all societal conventions, but anytime I watch Freddy Got Fingered, I just can’t find anything humorous about it. I’m not a prude, but Green’s attempts to shock throughout the movie, particularly his repeated insistence on showing graphic beastiality, whether real or simulated, are beyond the pale for me as a viewer. Rather than finding it funny, much of the film’s attempts at humor just strike me as gratuitous and sadly sophomoric. Of course, this is Green’s established brand, but having to endure his hijinks for a full 90-minute runtime is asking a lot of any viewers who aren’t fully on board with the act. I suppose that I can applaud Green for taking $15,000,000 from a huge movie studio and turning it into an aggressively unmarketable experimental “comedy,” perhaps even a satire on the tired formula of the gross-out studio comedy, but I can’t really forgive him for making a movie that isn’t even a touch funny or artful.

The DVD copy of Freddy Got Fingered that I have isn’t even mine, really. It got mixed in with my things when a roommate of mine moved out of our shared house about seven or eight years ago, and though I really don’t enjoy the movie, I’ve actually watched it a few times in the past several years in light of the aforementioned pieces written about it. I can absolutely see how the film can be seen as an influential piece of the puzzle for a neo-surrealist branch of comedy that has flourished, particularly on television, in the 21st century. Freddy Got Fingered shares a challenging approach to comedy that is mirrored in several notable and beloved comedy shows such as Tim & Eric Awesome Show, Great Job!, Squidbillies, and other shows from the Adult Swim lineup. Its plot, its resistance to classical rules of storytelling, and insistence on incorporating non-narrative diversions into its structure for questionably comic value are all mirrored in one of my favorite recent(ish) comedies, Hot Rod. This movie, starring Andy Samberg as a wannabe stuntman who tries to raise money to save the life of his dying stepfather so that he can best him in a fight, was absolutely influenced by Green’s brand of outrageous comedy. The biggest difference between the two, I think, is that Samberg is able to craft a likable and genuinely relatable character in his lovable loser, while Green’s Gord is simply too weird and too off-putting to engage any real sympathy or audience identification. I will allow that that may be exactly the point, but I just find Green’s performance in Freddy Got Fingered to be too grating, and I can’t enjoy the movie as a result. 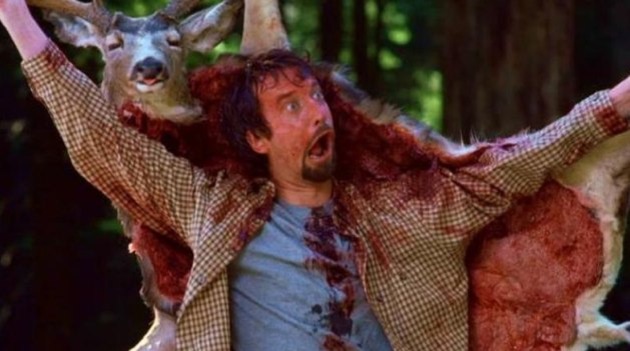 I really don’t like writing about movies that I dislike. I think that it’s much more difficult to find something of worth to say about a piece of art that I actively don’t like than it is to find adequate praise for something I find exceptional, but I still try to find silver linings in the movies that I’ve outgrown, or that I never liked in the first place that somehow ended up sticking around my collection. I try to take advantage of the opportunity of watching these movies freshly, and critically, to find some new appreciation for or understanding of them, but I really can’t say that I’m going to be looking at Freddy Got Fingered in a new light, or at all, in the future. I can understand what people might see in it, and I can even grant that it has some notoriety or import in its genre that should be respected, but I just don’t find it funny or satisfying in any way. It’s not the worst movie in history, as some might have speculated at its release, but I really don’t think that it has aged well, particularly in comparison to more modern surrealist comedies. Green’s act seems more stale and antiquated to me than provocative or darkly funny. If the movie works as fodder for a think piece, it doesn’t work for me as an actual viewing experience, and if it doesn’t make me laugh, I don’t really care that it represents an admirable dedication to a particular brand of meta-comedy.