I have owned the DVD of Oliver Stone’s Alexander director’s cut for over ten years. In that time, I have viewed it exactly once, shortly after purchasing it in the spring of 2006 at the Blockbuster on Forbes Avenue during a sale shortly before the store closed. While rewatching Alexander for this project, I was reminded of the reasons that I had never bothered to go back to it after that initial viewing. The film is simply a mess. It doesn’t work on any level. It is too dull and tedious to work as an action film, too shallow to work as a historical drama, and too conventional to work as the art film that Stone badly wants it to be. While Alexander is certainly beautiful to look at, its interminable length and poor acting make it a misery to sit through. 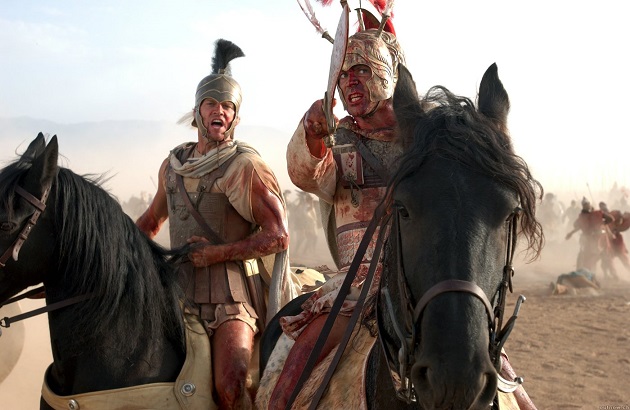 Alexander is a swords and sandals epic that traces the life of Alexander the Great (Colin Farrell) from birth to death, focusing largely on his conquest of much of the known world in his 20s and 30s. Alexander’s life is related to a scribe by an aging Ptolemy (Anthony Hopkins), and the film proceeds as a fairly typical Oliver Stone biopic. In fact, I was reminded of Stone’s Nixon at times while I was watching Alexander. The subjects of both films are men who are convinced of the greatness of their own destinies, obsessed with obtaining power, and who are ultimately consumed and brought down by their desire for power. Where Nixon succeeds and Alexander fails, however, is in making its subject a relatable and even, at times, sympathetic character. Perhaps by necessity of its setting in Greek antiquity, rather than feeling like the story of a real historical figure, Alexander feels like mythmaking. While there’s nothing wrong with mythologizing a historical figure, that mythmaking both robs Alexander of his relatability as a human character, and is at odds with Farrell’s angsty, dead-serious portrayal of Alexander the Great.

It isn’t just Farrell who turns in a lacking performance, unfortunately. Alexander must feature one of the most squandered assemblages of talent ever in a single film. Hopkins is largely reduced to the role of a voice-over narrator, appearing in only a handful of brief scenes, in which he does little besides dictate his voice-over narration to an on-screen scribe. Angelina Jolie, as Alexander’s mother Olympias, is an Oedipal seductress who is given little to do on screen besides pout and smolder. Her role as a major influencer on Alexander’s life and as a central schemer in the machinations that lead to the death of King Philip (Val Kilmer), Alexander’s father, seem unearned. Similarly, Rosario Dawson and Jared Leto are both underused, as Alexander’s wife and (not so) secret lover, respectively. In fact, the only performance in the film that stood out to me was that of Kilmer as King Philip. Kilmer gained 50 pounds for the role, and he lets his physicality do the heavy lifting for him in the performance. It stands in stark contrast to Farrell’s verbose, manic Alexander and Jolie’s subdued Olympias. 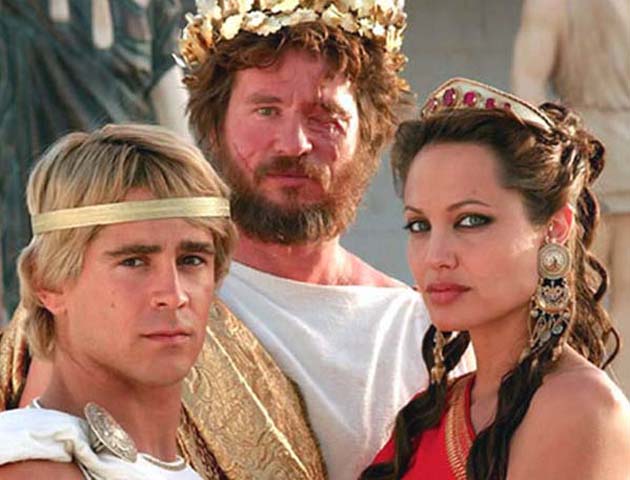 Despite its many flaws, there are some things to like about Alexander. As I mentioned, the film is often breathtakingly beautiful. If the film’s casting budget largely feels wasted, its special effects and filming budget do not. Stone’s recreation of ancient Greece and Babylon is beautiful, and it really works. The sets and costuming are detailed and beautiful to look at, and they go a long way to lending it credence as a history. The large scale battles that are featured in the film, especially Alexander’s first victory, are excellently shot, blending overhead shots of mass troop formation with close-up shots of visceral hand-to-hand combat.  The film’s real world locations are also beautifully filmed, with the final battle in India standing out in particular. The lush greens of the Indian jungle stand out richly in contrast to the film’s existing color palette which is dominated by reds and golds. It’s a shame that Stone can’t reign in some of his more experimental tendencies during that final battle, opting to color shift the film halfway through the scene, because it takes away from a set piece that is working, visually, and serves as a reminder of the self-indulgence that the whole film is suffering from.

Upon its release in late 2004, Alexander was panned critically and bombed spectacularly at the domestic box office, returning just under $35 million against a $155 million dollar budget. International box office receipts would make the film a very modest financial success, and the film would go on to have great success in the home video market, with four separate cuts of the film being released by 2013. I have only seen the 2005 director’s cut of the film, but I can only imagine that the two later cuts (the “Final Cut” and the “Ultimate Cut”) would be even more interminable than the 2005 version, as they are both nearly four hours long. Ultimately, these additional cuts of the film are indicative of the extreme self-indulgence that hamstrings Alexander in general. Stone falls in love with his own story, and too often opts to tell rather than show. As a result, its action set pieces, while enjoyable, are too few and far between, causing the film to feel like a historical reenactment. However, the film is unsuccessful in that regard as well, because even after spending nearly three hours with the subject, I didn’t feel that I came away with any larger understanding of who Alexander the Great really was as a person. The personal details that could have fleshed out Alexander, making him a well-rounded protagonist, and making for a more interesting and successful film in general, are largely glossed over or left to insinuation.

It’s a shame that Alexander doesn’t make for a better film, because the building blocks are there for something more entertaining and engaging. With a little more editorial oversight, Alexander could have been an effective historical action film; with better casting and a more personal (though probably less historically accurate) treatment of its subject, it could have been an interesting biopic of one of ancient history’s most important figures. Without either of those things, the end result is a bloated historical epic that is often content to meander from one life event to the next, failing to provide a more personal context for Alexander. Apparently, the “Final Cut,” released in 2007, attempts to rectify some of these shortcomings and includes a great deal of footage examining Alexander’s sexuality and his relationship with Hephaistion (Leto), as well as his relationship with both of his parents. Unfortunately, I have only seen the director’s cut, and don’t have the patience to sit through Alexander another time to find out if Stone’s attempt to have his cake and eat it too by extending the film’s runtime by nearly an hour is worth it.