Written by: Charlie Kaufman & Donald Kaufman (from the novel The Orchid Thief by Susan Orlean)

Charlie Kaufman is, hands down, my favorite screenwriter. He’s also one of the few working screenwriters who has developed into a true auteur, almost immediately establishing his singular, idiosyncratic voice in his first few feature scripts. Being John Malkovich announced the arrival of both Kaufman and director Spike Jonze as major level talents, but it was their second artistic pairing, Adaptation., that revealed the depths of Kaufman’s narrative dexterity. Adaptation. was also the film that introduced me to Kaufman’s cerebral brand of storytelling, and hooked me on his neurotic genius.

Famously born out of Kaufman’s real life writer’s block while attempting to adapt the Susan Orlean novel The Orchid Thief, Adaptation. is, instead, a journey into the writer’s head, exploring the process of adaptation and writing itself as Kaufman inserts himself into his own screenplay. The Charlie Kaufman (Nicolas Cage) of Adaptation. is a caricature of the real life Charlie Kaufman, highlighting the screenwriter’s awkwardness and insecurity as he struggles to find an entry point into his film adaptation of The Orchid Thief. Cage also plays Kaufman’s fictional twin brother, Donald, who is also working on a screenplay, and who serves as a foil for the fictional Charlie. The film’s narrative is highly complex, layering the story of Kaufman’s writer’s block with scenes from the novel, which depict New Yorker journalist Susan Orlean’s (Meryl Streep) meeting, and subsequent obsession with, orchid hunter John Laroche (Chris Cooper). By the film’s end, Kaufman has crafted an ouroboros of a story, self-referential to the point of collapsing in on itself in a final act that is both intentionally clichéd and artificial, and also genuinely cathartic.

As I mentioned earlier, Adaptation. was the film that really introduced me to Charlie Kaufman. I had seen Being John Malkovich on Comedy Central sometime prior to having seen Adaptation., but it was the latter film that made a real impression on me. I picked it up on DVD (used from Blockbuster, as was my wont in those days) sometime in 2003 during my senior year of high school. I hadn’t seen the film in theaters, but I remembered reading a review in Newsweek magazine that detailed Adaptation’s creative genesis and my interest was piqued. What I experienced when I finally got my hands on a copy of Adaptation. did not disappoint and turned me into a lifelong devotee of the work of Charlie Kaufman.

I had seen plenty of movies that trod in waters of self-reference and that highlighted aspects of their own creation or artificiality, but none quite like this one. Adaptation. was a deep dive into the entire creative process. I had never before seen a film that put its stitches and seams so on display. I don’t remember my first viewing specifically, but I know that the first few times I watched the film, I still couldn’t quite put all the pieces together. The narrative jumps forward and backward in time, layering and stitching together the threads of its story, mixing together real people and fictional characters, all being presented in a highly self-conscious filmic representation. Adaptation. simultaneously draws the viewer in to witness its characters’ most vulnerable moments, while keeping them at a distance through a veil of artificiality. It’s complex, high-minded filmmaking, and it can be a lot to take in. 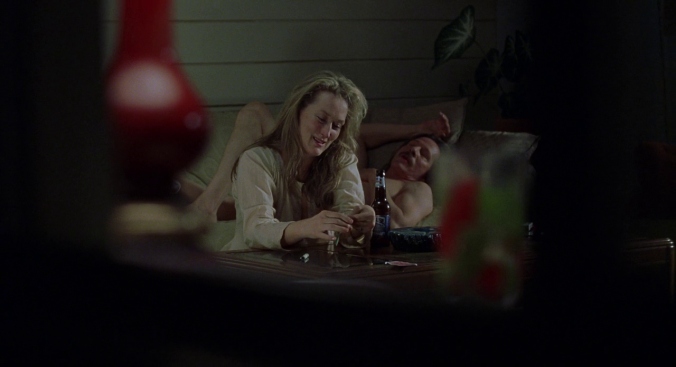 With all of the high concept ins and outs of its screenplay, it would be easy for Adaptation. to veer off into the territory of navel gazing, or simply to fall apart under the weight of its own ideas. The thing that makes the film so successful is that it is so rooted in genuine human emotion. The performances of its three leads and Jonze’s warm treatment of their flawed, sometimes unlikable characters, keep the film emotionally resonant. Cage is great, and shows a fairly dynamic range in portraying both the neurotic, misanthropic intellectual, Charlie, and the brash, dopey populist, Donald. Donald so obviously looks up to Charlie, attending screenwriting seminars in an attempt to impress his famous brother. Charlie is embarrassed both by and for his twin’s earnestness. Though they spend the bulk of the film fighting and bickering, in fact much of the film’s humor is derived from Donald’s role as a mirror image to Charlie, the twins are there for each other by the end of the film. The love/hate relationship between the twins is the emotional heart of the film, and its final payoff is devastating. As Donald lies, dying, in the middle of the road, he and Charlie share a moment of true pathos. Charlie cradles his dying twin’s head and sings “Happy Together,” an ongoing motif in the film, in an attempt to keep him from heading in to the light.

Streep and Cooper are both excellent, as well, with Cooper winning an Oscar for his portrayal of Laroche the orchid poacher. He’s responsible for one of the film’s funniest lines. When describing the fleeting nature of his myriad interests throughout life, and in particular his decision to stop collection tropical fish, he says, “…One day I say fuck fish. I renounce fish. I vow never to set foot in that ocean again, that’s how much fuck fish.” Laroche’s finality is reflective of the film’s emotional message that love and happiness can be fleeting, so when you find some of either, enjoy it while it lasts and learn to let it go when it’s gone. Over the course of the film, we see Susan Orlean learn this, as she grows more and more enamored with Laroche. Early in her research for The Orchid Thief, we see Orlean drawn in by Laroche’s charisma, and his dogged pursuit of the ghost orchid, which she becomes obsessed with seeing. Pursuing the ghost orchid and Laroche is a metaphor for Orlean chasing her own moment of happiness and adventure, outside of her loveless marriage and stable New York City academic lifestyle. By the film’s end, she’s found that both the orchid and Laroche’s charm were illusory, and she is left, like Charlie, cradling the dead body of a man she loved. 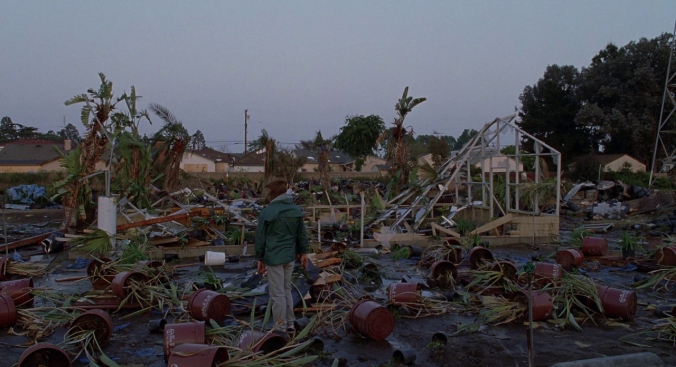 As I mentioned earlier, the film’s denouement is intentionally artificial and contrived. The brothers Kaufman follow Orlean to Florida where they discover she and Laroche’s secret stash of drugs, derived from the orchids that he grows in his nursery. When the twins are found out, Laroche and Orlean chase them into the swamps of the Everglades, intending to kill them to cover up the secret of the drugs and of their affair. Through a series of increasingly unlikely and violent twists, Donald and Laroche end up dead, while Orlean and Charlie are left in the swamp trying to pick up the pieces. In the hands of a less capable filmmaker, this narrative left turn could potentially unravel the whole film, and would certainly read as wholly unrealistic. However, Jonze directs the scenes masterfully, creating tension out of a patently absurd situation, and also wringing deep pathos out of both Donald’s death and Orlean’s realization that she is, in Charlie’s words, an “old, lonely, desperate, drug addict.” Even after watching her hunt Charlie and Donald through the swamp, it’s impossible not to feel some pity for Orlean, after having seen how empty the rest of her life is outside of the hunt for the ghost orchid. Jonze chooses to hold the camera on Orlean as she keeps Laroche’s bloody body from sinking into the swamp, letting the audience pick up her realization that everything she’d hung her hopes on was a lie.

I think this blend of the cerebral and the emotional makes Adaptation. Kaufman’s most fully realized work. It probably isn’t my favorite movie that he’s written, but it is likely his best. The script is Kaufman’s most complex, but the emotional resonance of Jonze and the spectacular cast give it a core for the wacky, high concept ideas to revolve around. Both in the film and in the script, Kaufman and his on-screen counterpart break all of the rules of screenwriting in their attempts to capture the essence of The Orchid Thief. While he may never truly unravel the mysteries of the novel, the Charlie Kaufman of the film does learn a profound lesson by the end. By the film’s close, Charlie has gained some perspective and is ready to finish up his screenplay. In a way, the screenplay has been his ghost orchid all along. 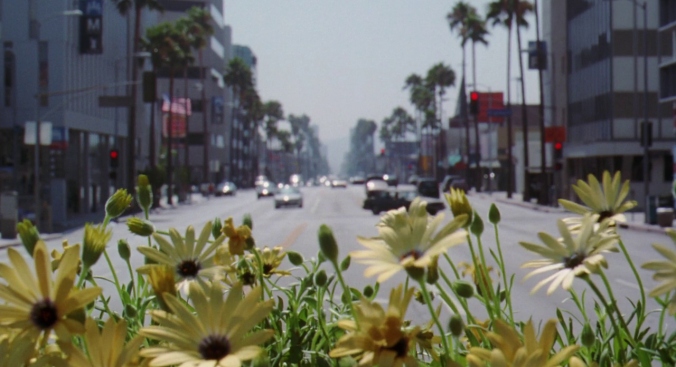 It’s a wonder that a film as bursting at the seams with concepts as Adaptation. can wrap up so neatly, but the final shot is simple and perfect and it never fails to make me smile. With Charlie driving off to put the finishing touches on his screenplay, the camera lingers on a planter full of black-eyed susans as “Happy Together” by the Turtles fades in on the soundtrack. Gradually, the cars in the background begin to speed up as day turns to night in what is now a time lapse shot. The flowers close and then open as the Sun rises again, and the cars continue to speed by in the background. Something about those flowers opening and closing in the sped up time lapse, striving to get closer to the light, has always felt like a perfect ending to this film. It symbolizes the cycle of death and rebirth, the hope that each new day can bring. Adaptation. is a near perfect film, one of the best of the 21st century so far, and I love watching it every time I pull it off the shelf.