The Friday the 13th series bounces back admirably from its two lackluster sequels in what was initially intended to be its final installment. The Final Chapter attempts to make changes to the stale formula of its predecessors, and actually features a few performances that are worth watching, as well as upping some of the suspense factor, providing actual scares rather than the gruesome shocks of the first few films. The subtle attempts to change the patterns of the series make The Final Chapter feel somewhat fresh, and make it a highlight in the series. This might be faint praise, but it’s certainly the best of the five that I own, and from my memories of the other movies in the series that I’ve seen, it’s likely the best in the series, overall. Its higher production values give it a boost above the original, and its lack of adherence to the established Friday the 13th formula make it unique enough to stand head and shoulders over the other, highly derivative sequels. 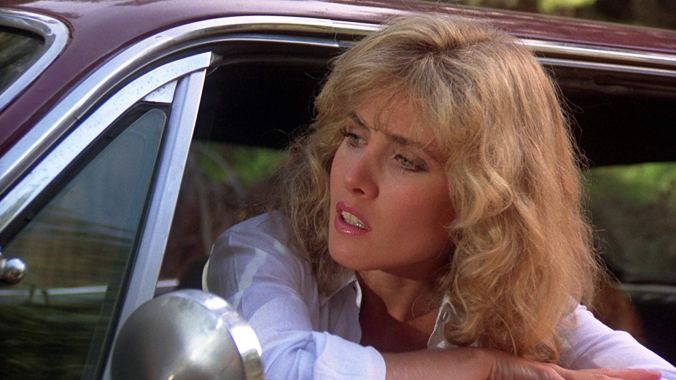 The Final Chapter picks up immediately after the events of Part III, with Jason’s body being taken to the morgue. Presumably, his fight with Chris put Jason (White) down for the count, but you can’t keep a good unstoppable psycho killer down, and, as such, Jason miraculously revives in the morgue. After killing the orderlies on duty there, Jason is back on the loose and headed towards Crystal Lake, where a new family has moved in. Trish (Beck) and Tommy (Feldman) Jarvis, and their mother (Joan Freeman), have moved to the country in search of a quieter life, but the group of teens who have rented the house next door might have other plans. Those teens lead Jason right back to the lake, and he quickly gets back to his old tricks, rampaging through the woods, picking off his victims one by one, in gruesome and shocking fashion. While Jason is stalking his victims, however, there is someone stalking him. Trish meets a young man named Rob (Anderson), whose sister was one of Jason’s victims in an earlier massacre, and Rob has sworn to get revenge on the masked killer. As such, he shows up at the end of the film to help protect Trish and Tommy from Jason. However, Rob proves to be no match for Jason and the two siblings are left as the last pair standing, forced to confront the monstrous Jason in a fight for their lives. 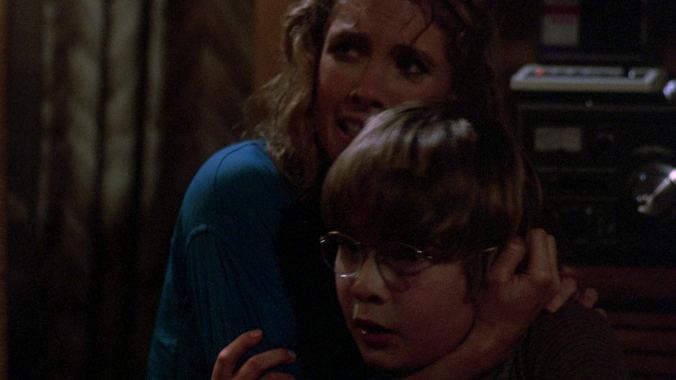 The introduction of the Jarvis family was a conscious decision on the part of the film’s creators to create protagonists who would be seen as more than just disposable fodder for Jason’s murderous rampage, and that decision pays dividends. The earlier films in the series feature a host of interchangeable murder victims, and, as such, don’t invite any sort of audience identification, but The Final Chapter actually gives us a few characters who are sympathetic and fleshed out enough to make them worth rooting for. Focusing on a family gives the film a feeling of higher stakes than previous entries in the series, and Tommy, in particular, is a notable addition to Friday the 13th lore. More than any other character in the series, Tommy gets actual character traits and a personality that makes him endearing to the audience. Casting an up-and-comer in Corey Feldman also helps this cause. He doesn’t have to do much acting in the film besides being an excitable, cute kid, but his performance stands out as one of the best in a film franchise that doesn’t put much weight in the dramatic chops of its actors. Beck doesn’t fare quite as well, largely falling into the familiar role of the final girl, but she is still very good. She has a bigger screen presence than any of the actresses who preceded her in that role, and she brings a wholesomeness to her portrayal that was largely absent from any of the first three films. Her performance ranges from nurturing and kind to savage and fearsome during her final showdown with Jason, and she shows more depth and range than any actress in the franchise previously or since.

While much of its plot does, in fact, play out like a paint-by-numbers Friday the 13th sequel, the little differences that I’ve already mentioned in The Final Chapter’s casting and attempts to flesh out its characters do wonders to freshen up the formula. Also, new director Joseph Vito brings a new storytelling sensibility to the franchise. Jason’s assault on the house that the teens have rented feels more purposeful than any of his previous rampages, with Vito blocking the kill scenes out with efficiency and something resembling narrative continuity. The kills are still a random string of gory cut scenes, but Jason moves through the house with something resembling forethought, as if he’s actually on a mission with an achievable end goal in this film. Vito also dispenses with the silly tone taken in Part III, delivering a grimmer, more serious entry into the series. Like any good horror film, there are moments of levity to contrast the terror, but overall this is a darker movie. The stakes also feel heightened in this entry with the decision to introduce a character who already has an understanding of what Jason is capable of, and who has made it his stated mission to kill the monster. Though it doesn’t turn out to be Rob who kills Jason in the end, his foreknowledge seems to even the playing field, even if that advantage does prove to be futile. The Final Chapter takes itself seriously, which could have been disastrous, leading the audience to point out the obvious silliness of this movie and its ilk, but instead the darker tone and attempts at audience identification make for a movie that stands out in a crowded field of B-slashers.

Vito is also to be credited for creating one of the series’ most iconic final chases. Each movie in the Friday the 13th series invariably ends with its final, usually female, protagonist desperately racing through the woods or some other locale, with Jason and his machete close on her heels. The Final Chapter delivers one of the best chases, with Trish narrowly escaping Jason time and time again as he lays waste to her home, all while she is trying to distract him and protect her brother, Tommy. This final fight scene might represent the most awesome depiction of Jason’s superhuman abilities of any sequence in the series, at least in the films that comprise the first half, with which I’m more familiar. It packs genuine suspense, from the moment that Trish and Rob arrive at the teens’ rental home to find their mangled corpses, until the very last moment that Jason is bearing down on Trish in her own home, after having chased her through the woods in between. It also packs in great jump scares, with Jason casually tossing bodies through picture windows, and crashing through doors and walls like a homicidal Kool-Aid Man. No matter where Trish hides, Jason is right behind her, bursting into frame abruptly and violently. It’s a great sequence, and it’s capped off with a memorable ending worthy of the original’s reveal of Mrs. Vorhees. Tommy arrives just in the nick of time, disguised as a young Jason, and is able to distract and confuse the killer long enough for his sister to get the drop on Jason and knock his mask off, before Tommy jumps on him, hacking away with a machete at Jason’s prone, seemingly lifeless body. It’s a thrilling ending to the series’ most exciting sequel.

I think it likely goes without saying that The Final Chapter is my favorite of the Friday the 13th sequels. I think I probably even prefer it to the original. It can stand alone as a horror movie, without resting on the laurels of its franchise affiliation. It takes the tried and true formula of the rest of the series, and genre overall, and fleshes it out with slightly more interesting characters and a bit more depth than most of the rest of its ilk. Besides featuring Corey Feldman in a pre-fame role, the film also features a young Crispin Glover in a supporting role, and those casting choices make it obvious that there was some attempt made to make this a higher quality of movie than should probably be expected of a third sequel to a slasher rip off. It all works pretty well, however, and the end result is a totally enjoyable, mildly rewatchable horror movie. The series may have been better off truly letting this be the final chapter, but there were many, many subpar sequels to come. As a result, the Friday the 13th brand has probably become somewhat watered down, but The Final Chapter is well worth another look for its attempts to give the series a much-needed breath of fresh air, while still remaining true to the core dynamics of the franchise. It and the original are likely the only ones that I can recommend someone who isn’t already a fan of the series taking the time to check out today.