Drunken Master is one of the seminal classics of the kung fu genre. I didn’t see the movie until after I had already become enamored with Hong Kong martial arts films and decided to trace the lineage back to some of the great films of the early period of the genre, but it’s still a favorite of mine. Like many Americans getting into kung fu movies, my journey began with the films of Bruce Lee, and then jumped forward to the modern kung fu films of Jackie Chan and Jet Li, whose American films were becoming very popular around the time that I started high school. After I tired of their late 1990s and early 2000s era Americanized martial arts films, I started seeking out Chan’s earliest work, and discovered a treasure trove of classic Hong Kong cinema. Jackie Chan has become a household name, and in many ways has come to signify a certain type of martial arts cinema. The roots of his particular blend of slapstick comedy and martial arts can be found on full display in Drunken Master.

The film casts Chan as the folk hero Wong Fei-hung, a revolutionary kung fu master who lived at the turn of the 20th century, and a common figure among popular martial arts media. In the film, young Wong is a troublemaker, who is only beginning his journey towards becoming a hero and martial artist. Wong is more interested in causing mischief with his friends and in picking fights than he is in learning the disciplines of kung fu, so his father, Kei-ying (Lam Kau), recruits the feared and legendary master Su Hua-chi (Yuen Siu-tien) to mentor the boy and mold him into a kung fu master. Master Su introduces Wong Fei-hung to a rigorous training regimen, meant to strengthen the pupil’s mind and body in preparation for his learning of Master Su’s secret style of kung fu, “drunken boxing.” Though he initially bristles at the torturous training, Wong eventually falls in line after suffering an embarrassing thrashing from Thunderleg (Hwang Jang-lee), a local contract killer and bully. Wong masters drunken boxing just in time to save his father from Thunderleg, who has been hired to kill him by a business rival to whom the elder Wong will not sell his land. 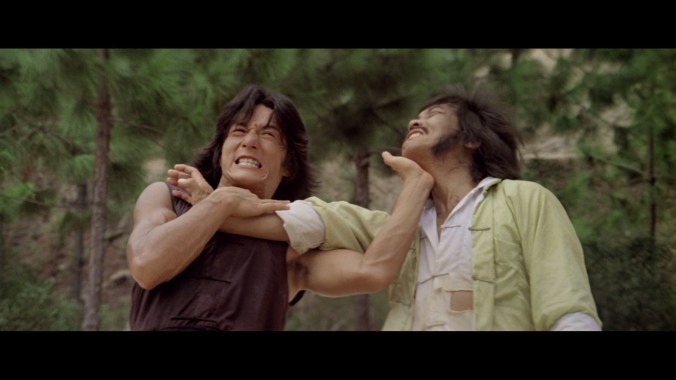 Drunken Master wasn’t Jackie Chan’s first hit in Hong Kong, but it, along with its predecessor Snake in the Eagle’s Shadow, also directed by Yuen Woo-ping, were Chan’s true breakthroughs. The films established the comedic style of kung fu that the actor would become synonymous with, and ushered in a sea change in the genre. The films also helped Chan to step out from Bruce Lee’s shadow, as he had been groomed as a potential successor to Lee as the next big star of Hong Kong action cinema. While Chan would go on to experience major success both at home and internationally, likely earning a place on the Mount Rushmore of modern action stars, he would do it through establishing a potent blend of comedy and action. Chan’s unique style of martial arts, acrobatic and lithe, is on full display in Drunken Master, and his comedic timing is enhanced by the film’s plot device that drunken boxing can only be optimally performed when under the influence of alcohol. Throughout the film, Chan glides through his fight scenes, displaying an oxymoronic graceful clumsiness and the sort of effortless physical timing that denotes a master. He nails his spots and his stunts, while maintaining the engagingly charismatic persona that makes him a star. Though the film doesn’t feature the daredevil stunts that would become Chan’s calling card later in his career, the seeds of his slapstick style of action comedy are clearly already on display.

Chan isn’t the only engaging martial artist in the film, however. Drunken Master is full of great fight scenes that are entertaining, exciting, and funny. Yuen Woo-ping began his career with Snake in the Eagle’s Shadow and used that film and this one to cement his style, going on to further his credentials by working with several legendary martial arts actors and further the blend of comedy and martial arts. Though much of his cast in Drunken Master is not as famous or accomplished as the actors who he would make his name with, Yuen helps his performers stand out in unique ways during their fight scenes. Hwang is the perfect villain in the film as Thunderleg, and Yuen uses the actor’s physicality perfectly, crafting him as a traditionally one-dimensional, cruel and punishing villain. Though the Korean actor would continue to work in Korea and Hong Kong into the 1990s, Thunderleg is probably his signature role, and his unique fighting style in the film is memorable. Dean Shek, who had already been making films for Shaw Brothers Studios for a decade, stands out as Kai-hsien the assistant instructor at Wong Kei-ying’s school, whom Wong Fei-hung and his friends bully early in the film. He provides a lot of comic relief early on and is a good foil for Jackie Chan. Yuen Siu-tien, Woo-ping’s father and an established martial arts star, steals several scenes as Master Su. He plays the role of the drunk and the warrior equally well, snapping into action in the film’s fight scenes, while he dodders around, casually abusing Wong, during its many training montages. The many different styles of kung fu on display, and Yuen Woo-ping’s ability to excellently choreograph fight scenes that highlight those stylistic differences, make for a varied fight-fest that doesn’t get bogged down in the repetition that can befall some lesser martial arts films.

The film is, admittedly, fairly light on plot, but I don’t think that that is necessarily a bad thing. I don’t really watch kung fu movies looking for intricately plotted narratives, and Drunken Master delivers on the promise of a fun, action-packed two hours of entertainment. The film’s plot will be familiar to anyone who is familiar with the archetypal narrative of the hero’s journey, generally, and intimately familiar to anyone who is familiar with kung fu films. It uses the traditional narrative of some outside force threatening the protagonist’s village/family/martial arts school, and the protagonist having to train to defeat that outside force, and becoming a kung fu master in the process. While some of the specifics of this narrative are unique to Asian cultures, the narrative itself is universal and bears a great deal of similarity to the classic American Western. I have always felt that the Western and the Asian action genres of martial arts and samurai films have had a great deal in common and have regularly been in cinematic dialogue with one another. There are obvious examples of crossover with The Magnificent Seven being a direct adaptation of Seven Samurai, and with A Fistful of Dollars being adapted from Yojimbo, but I think that overall the genres are constantly influencing and informing one another. Specifically in Drunken Master, I think that Yuen Woo-ping shows the influence of Sergio Leone early in the film, particularly in the way he has characterized and chooses to frame Thunderleg.  The sort of primal, direct narratives that Westerns and martial arts films traffic in are cut from the same cloth, despite cultural specificity, and the focus on “men of action,” while perhaps outmoded, is certainly familiar. I guess it isn’t surprising that these two genres are among my favorites, and that I’ll generally be pretty satisfied to watch any Western or martial arts film.

Drunken Master is the sort of genre cornerstone that anyone who is interested in getting into kung fu movies, or Hong Kong cinema generally, should see. It is an early career classic from some of the central players in the New Hong Kong Cinema that would emerge in the 1980s, and its influence on the modern martial arts genre should not be understated. I don’t know that I personally love the slapstick style of Jackie Chan and the extreme emphasis on comedy in his early kung fu films as much as the traditional wu xia inspired kung fu films of the Shaw Brothers, but Drunken Master is too fun not to enjoy. The film’s fight choreography stands up to modern films, even 40 years after its release, thanks to the work of Chan and Yuen Woo-ping, both legends in the world of martial arts cinema. The film’s injection of humor makes it a perfect starting point for people looking to start watching more kung fu movies, and the presence of a mega-star like Jackie Chan make it fairly easily accessible, as well. Martial arts films had already reached a high level of artistic accomplishment by the release of Drunken Master, but the film’s success helped to reinvigorate the genre after the death of Bruce Lee, and helped to keep it relevant, if somewhat disregarded as “low art,” with international audiences. The film’s innovations wouldn’t be fully realized until Chan broke through as a star in Hollywood in the early 1990s, bringing along with him a wave of Hong Kong action stars and American releases of their films, but without Drunken Master, it’s arguable that this boom period for martial arts cinema wouldn’t have happened. If you’re only going to watch one kung fu movie, this might not be the Platonic ideal to choose, but if you want to explore the genre and seek out some of the more unique entries to its canon, Drunken Master can’t be missed.

One thought on “Drunken Master”