Written by: Frank Pierson (from the magazine article by P.F. Kluge and Thomas Moore)

Dog Day Afternoon is one of the oldest DVDs in my collection, both in terms of its place on my shelf and in terms of the actual production of the disc. I would imagine I purchased it sometime in the early 2000s, shortly after buying the Playstation 2 that my family used to play DVDs, probably on a whim based on my affinity for Al Pacino at the time. I know that I hadn’t seen the movie before owning it, and I’m fairly certain that I was only tangentially familiar with it and its subject matter. As a crime movie from the 1970s, with a highly pedigreed cast and director, Dog Day Afternoon fit squarely into my wheelhouse during my teens, and it became one of my favorite movies during that time. It’s a classic crime movie that I don’t think gets enough credit today for being as interesting and influential as it really was. Though I don’t watch Dog Day Afternoon with any regularity anymore, I think that some of its subject matter has only become more relevant in the 21st century with the advent of reality television and social media.

The film is based on the real-life robbery of a Chase Manhattan Bank branch in Brooklyn in 1972. In the film version, the robbers are Sonny (Pacino) and Sal (Cazale), who are woefully unprepared and ill-equipped to pull off the heist. The inept robbers have arrived after the bank’s deposit has already been collected for the day, so there is just over $1,000 left in cash in the bank. To make up for his miscalculation, Sonny decides to steal traveler’s checks and prevent them from being traced by burning the bank’s check register. However, the bank’s neighbors see the billowing smoke coming from the building and call the police, prompting the robbery to turn into a true hostage situation, as Sonny and Sal barricade themselves inside the bank with the employees. What follows is a tense standoff between Sonny and police Sergeant Moretti (Durning), in which Sonny attempts to negotiate a way out of the situation for he and Sal, while Moretti tries to ensure the safety of the hostages in the bank. A huge civilian crowd starts to form, as the situation devolves into a circus, with Sonny repeatedly attempting to incite the crowd and the police, clearly enjoying his brief moment of notoriety. Though he feels that he has total control of the situation, and that he will be able to extricate himself and Sal from the bank safely, it becomes clear as the hostage situation extends further and further into the night that there likely won’t be a happy ending.

The thing that’s immediately fascinating to me when watching Dog Day Afternoon in 2018 is how prescient and immediate the movie feels. Though perhaps not as much as Lumet’s next feature, Network, this film feels like, with very few alterations, it could have been made today. Though it’s been a feature of news media since the advent and proliferation of cable news, the type of instant celebrity embodied by Sonny in Dog Day Afternoon feels like a very modern phenomenon. Social media and the constant news cycle keep viral stories, such as the one presented in the film, in the public eye much more easily, and they allow for access to breaking news as it happens. It would be very easy to imagine a remake of the film in which the crowd doesn’t gather around the bank, but rather engages with the hostage situation via a Twitter feed, with the police not having to worry about the opinions of just New Yorkers, but of people around the world. It would be a more cynical type of film, but, were it made today, I can envision Sonny planning out the heist to further his YouTube brand. The bank robbery and subsequent circus scene that develops surrounding it have the perfect making of a viral marketing stunt, and, knowing Lumet’s other films, I have to imagine that he had at least some inkling of the watered down celebrity culture that was coming in the near future. While Warhol predicted that everyone would have 15 minutes of fame, I think that in modern culture that brief moment can be distilled down even further, and Sonny’s “Attica!” scene is a perfect example of the sort of brief video clip that has come to define viral stardom in the modern age. Lumet was often an acerbic critic of the media, and Dog Day Afternoon needs little creative interpretation to fall in line with some of his other cynical, satirical films.

Of course the other aspect of the film that helps it to feel modern and alive is Pacino’s electric performance as Sonny. Delivered at the height of Pacino’s rise to fame, immediately after his star turn in the first two Godfather films, Sonny is my personal favorite Pacino performance of all time. The character is at the same time wired and exhausted, bursting with kinetic energy and mania, but always threatening to collapse in a heap from the stresses his life and his situation have foisted upon him. Pacino gets a (mostly) undeserved reputation for being bombastic and over the top in his performance style, but he plays Sonny to the hilt in this movie, and it absolutely works. He’s physical, he’s histrionic, he certainly gives evidence for some of the more overt tics that would emerge in his style in his later years, but he wraps it all in a believable and effective package, giving Sonny enough nuance to fill in the gaps between his outbursts. He balances his shouting, gestural performance style when hamming it up for the crowd and the police with the quieter moments that he shares with the bank tellers and with Sal, his accomplice. I had forgotten some of the truly touching interactions that Pacino and Cazale share in the film, seeming to genuinely care for one another as friends, and even more so I had forgotten about some of the great moments that Pacino shares with Penelope Allen, who plays the bank’s head teller.

Allen is great in her supporting role as a tough, no-nonsense bank teller who refuses to extricate herself from the hostage situation because she’d rather stay with “her girls,” and ensure their safety. She brings a matriarchal air to the film, but she’s also hardened in a way. She isn’t intimidated by either the robbers or the police, taking ownership of her role as pack leader among the bank’s employees. In many ways, she and Cazale’s Sal are the film’s stabilizing forces. Cazale provides an important foil to Pacino, as he did in the Godfather films. In Dog Day Afternoon, Cazale gets to show off his quiet, stoic side, much different form his better known role as Fredo Corleone. Although he doesn’t have much dialogue, allowing Pacino to do more of the verbose scenery chewing, Cazale’s reserved performance tells the audience everything they need to know about Sal. He’s maybe a bit dim, but he’s loyal and competent, and he’s able to keep a level head as the bank robbery continues to spiral out of control. Though his emotional register remains fairly neutral throughout the film, I always get a bit sad when Sal admits to being afraid to take the jet that Sonny has arranged for them to escape on as he’s never flown before. That extremely human admission, in a very small moment of the film, sells his performance for me entirely. 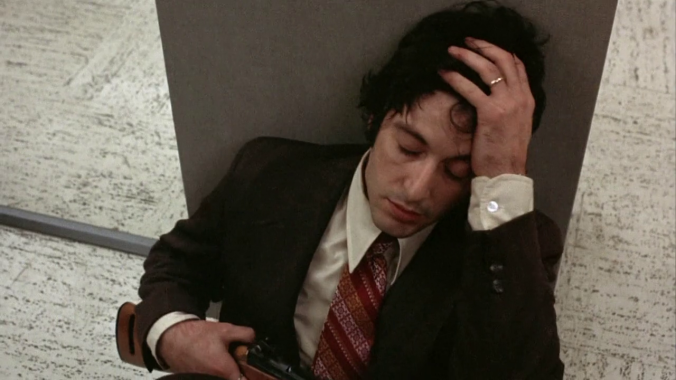 The dynamic between Sonny and Sal is an important one in the film, and their opposing demeanors are borne out thematically throughout. Most obviously, the performance styles of the two actors vary wildly, with Pacino’s Sonny more outwardly expressive, performative, and rambunctious, while Cazale plays Sal with a restrained, calm efficiency. Lumet continues this dichotomy through his treatment of the film’s two primary locations, the interior and exterior of the bank. The bank’s interior becomes a still oasis, where Sonny retreats to think and plan his moves, while the exterior becomes increasingly raucous as the crowd of onlookers and police grows throughout the film. The film’s only moments of true physical violence all occur outside of the bank, with Sonny being attacked on the sidewalk by one of the teller’s boyfriends, and of course with Sal being shot at the film’s end. Although this doesn’t take place directly outside of the bank, it still happens outdoors. The bank’s interior, however, is home to moments of emotional authenticity and vulnerability, the vault becoming an important visual reminder of security and refuge. Sal’s aforementioned fear of flying is an example of this vulnerability, as is the bank manager’s (Sully Boyer) admission to Sonny that he has two children at home whom he would like to see again. But the film’s most immediate moment of emotional vulnerability is the scene late in the film in which Sonny finally speaks to his wife, Leon (Chris Sarandon), on the phone. By now, it’s been revealed that Sonny’s motive for robbing the bank was to pay for Leon’s sex change, and though their relationship seems to be contentious at best, it’s clear that the two really love one another. During this brief scene, you can see the realization that he’ll never see his lover again wash over Sonny’s face as Pacino physically slumps, weighed down by the reality of the predicament he’s put himself and everyone he knows in. The quiet resignation in his brief conversation with Leon stands in stark contrast to the bellicosity that Sonny has shown up to that point, and indicates a further layer of the film’s operative dichotomy of wild abandon and homebound safety playing out within his own character.

In Dog Day Afternoon, Lumet hews fairly close to the reality of the event that he’s depicting, with him and screenwriter Frank Pierson knowing a juicy story when they see one ready to be ripped from the headlines. It would be hard not to make the spectacular bank robbery into a good movie, but Lumet’s wry sensibilities and eye for capturing authenticity elevate the film beyond its already intriguing subject matter. He encouraged his actors to largely improvise their dialogue, allowing them the freedom to turn in personal, memorable performances. His sense of pace and of location tighten the film’s narrative and focus. As in any very good thriller, there’s no fat to be trimmed, and the tension is ratcheted up and released at just the right moments. The film strikes a delicate balance as individual scenes are allowed to play out with their natural ebb and flow while the overall work continues its propulsive momentum towards its ultimate, inevitable finale. It’s a slow burn that’s also allowed to crackle and pop from time to time. In short, it’s one of the better thrillers of all time.