I spent a long, long time thinking about The Devil’s Backbone after the first time I saw it when I was in college. That was probably 2006, shortly after director Guillermo del Toro had really broken through to the mainstream with the release of the acclaimed fantasy Pan’s Labyrinth. I was taken with that picture, and its fantastical, allegorical approach to presenting the horrors of the Spanish Civil War, and I was eager to seek out other work from del Toro. I had already seen Hellboy (although I didn’t realize until years later that it had been directed by del Toro), but The Devil’s Backbone was the first Spanish language film of his that I discovered. I was instantly taken by this sad ghost story, and instantly recognized it as a companion film to the later Pan’s Labyrinth. The film takes a similar approach to exploring the Spanish Civil War, utilizing elements of fantasy and horror to allegorically depict the horrors of life under the threat of Fascism for both children and adults, alike. The film’s beautiful images and sorrowful story stuck with me for years, until I finally decided to purchase it in 2013 during a half price Criterion Collection sale at Barnes & Noble. It isn’t a film that I watch often, but it’s one that I’m very glad to have decided to add to my collection.

Set in the dying days of the Spanish Civil War, with Franco’s forces on the verge of defeating the left-wing Republican forces, The Devil’s Backbone begins with young Carlos (Tielve), a war orphan, being delivered to a secluded orphanage run by Carmen (Paredes) and Dr. Casares (Luppi), who are sympathetic to the Republican cause. Carmen and Casares are hiding a cache of gold, which they are using to help fund the Republican war effort, and, as such, they have gained the attention of the Fascist forces, with the orphanage becoming a target for bombings. An undetonated bomb stands upright in the middle of the orphanage’s courtyard, a stark reminder of the everyday reality of war within which these children are coming of age. Upon his arrival at the orphanage, Carlos is bullied, particularly by Jaime (Garcés), and he is told rumors by the other children of a ghost that haunts the orphanage, whom they call “the one who sighs.” When Carlos proves his bravery by venturing out of the communal sleeping quarters at night, he gains the acceptance of the other boys, but he also witnesses firsthand the existence of the ghost, and the attempts of the orphanage’s groundskeeper, Jacinta (Noriega), to break into a safe and steal the gold cache. Carlos, Jaime, and the other boys realize that the threat to their home is not from the ghost or from the war raging outside their doors, but from the ruthless Jacinta who will stop at nothing to steal the gold, even if it means destroying the orphanage and killing the wards who live there.

Del Toro has publically professed to The Devil’s Backbone and Pan’s Labyrinth being his favorites among the films that he has directed. Although I haven’t seen all of his output, I would have to agree. Both films are rich visually and symbolically, weaving thoughtful allegories that feature excellent performances from young actors and established stars alike. While Pan’s Labyrinth may get more attention, as it truly served as del Toro’s breakout, and is widely regarded as one of the best films of the early 21st century, I think I may prefer its sparser, more haunting predecessor. There is just something about the austere, remote setting of the miserable orphanage and its wards, both living and dead, that stays with me for days and weeks after seeing the film. The film sets its tone immediately. It’s both claustrophobic, as much of the action takes place within the walls of the orphanage, and liberatingly imaginative, as the fantasies of the young boys who live within are allowed to play out in the face of their dire surroundings. The Devil’s Backbone walks this balance between darkness and light throughout, leaving its audience to try to piece together which of the characters are good and which are evil. Initial assumptions about character motivations are often undermined by new information presented later in the film, and several characters are not what they seem. By the film’s final act, when the horrors of violence and death finally invade the orphanage fully in the personage of Jacinta, clear lines are drawn between good and evil, and the true nature of all of the characters is revealed. In a powerful final scene, del Toro presents a symbolically dense critique of evil, in the forms of greed, lust for power, and cruelty, that doubles as a critique on the savagery of war and the brutality of Fascism. Just as in Pan’s Labyrinth, in The Devil’s Backbone it is the human characters who are revealed to be the true monsters, and the human impulses to kill and destroy that are the true evil unleashed on the world.

The Devil’s Backbone is a ghost story, and it’s certainly a horror film, but it is rarely scary. Instead, the film is deeply unsettling and haunting. Del Toro resists the urge to present his ghost, Santi, as a menacing figure, even when he is first introduced. Santi is an orphan who disappeared the night that the bomb fell at the orphanage, and who the adults in the film believe simply ran off, frightened by the bomb. The children all seem to believe that Santi is “the one who sighs,” and though they are frightened of the ghost, he is almost never presented as a true threat. Santi can be seen from the earliest scenes in the film, sadly haunting corners of the frame, watching his former friends at play. He does stalk Carlos, who may be the only boy to actually see the ghost, but he’s hoping to make a connection and reveal the truth of his death. Santi is presented throughout the film as a pitiable figure, in need of help from the film’s living characters to truly be at rest, but there is another ghost that is present within The Devil’s Backbone that is more insidious.

The film’s opening voiceover, spoken by Dr. Casares references ghosts: “What is a ghost? A tragedy condemned to repeat itself time and again? An instant of pain, perhaps? Something dead which still seems to be alive. An emotion suspended in time, like a blurred photograph, like an insect trapped in amber.” This quote can be applied to all of the film’s ghosts, including Santi who is condemned to haunt the place of his death, reliving his tragedy and having his trauma frozen in time forever like an insect in amber. But I think that the quote most directly applies to a ghost that exists in the film only textually. The traumatic history of the Spanish Civil War is a ghost that is haunting The Devil’s Backbone, a film which sees del Toro resorting to fantasy to explore and interpret a real historical event. In the film, del Toro is commenting on the Spanish Civil War explicitly, but he is indicting all wars. He depicts the traumatic experience of life during wartime as a ghost which haunts the wards of the orphanage. One young boy has gained the nickname Owl (Javier González Sánchez) because he has become so traumatized he never speaks, only staring with his wide, haunted eyes. The undetonated bomb in the courtyard serves as a ghostly reminder of the war raging outside, but del Toro’s symbolic representations of war throughout the film are more powerful. War is the tragedy that society has doomed itself to repeat time and again. It’s an instant of pain, compounded one million times, and spread throughout the world like a vapor. Those affected by its ravages become ghosts themselves, set adrift in the world, their lifelike appearances belying the death they carry with them. 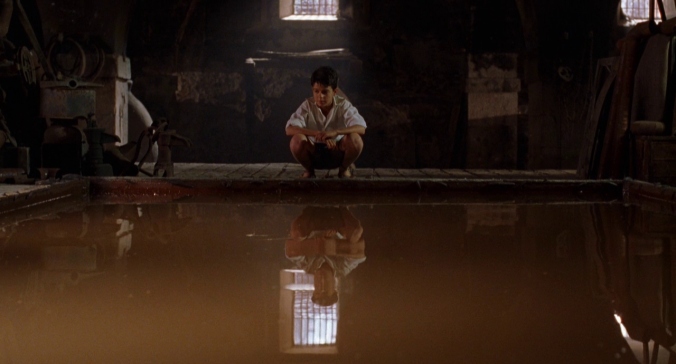 Political subtext aside, The Devil’s Backbone is a masterful film in all respects. It’s visually stunning, with a vibrant color palette of reds and oranges. The camerawork is subtly complex, with complicated but unassuming tracking shots giving the impression that the camera is following behind and spying on its subjects, always ready to duck behind the nearest corner. I love it when a film manages to mesh form and content so seamlessly. The film’s narrative progresses at a perfect pace, allowing scenes to breathe just before ratcheting up the tension, and the script is complex and twisty without being cliché. Though The Devil’s Backbone does turn on a significant plot twist in its final act, the reveal feels earned. Like the best twists, this one leave the viewer wanting to go back and rewatch, looking for clues, and repeat viewers will certainly be rewarded, as the film is deep with foreshadowing and callbacks. The film’s ending, while not elliptical, is just open enough that a crack of mystery remains. It’s a wonderful puzzle of a film, and it begs to be watched closely and intimately.

The film’s performances are all top notch, which is commendable with so much of the cast being comprised of young, inexperienced actors. Tielve delivers a soulful performance as the young Carlos. His wide eyes speak volumes to the sensitivity that he has to the world around him, but they also mask the determination that he brings to the role in the later scenes in which Carlos has to act decisively to save his friends. Garcés plays Jaime as a typical bully early in the film, pushing Carlos around and trying to maintain a façade of toughness, but by the film’s end he softens his performance to reveal the true Jaime as a frightened young boy burdened with carrying an unspeakable secret. The film’s adult actors all match the caliber of their young costars. Paredes plays Carmen as a steely, determined matriarch. She is the backbone behind Luppi’s softer, gentler patriarch, Casares. The two form a parental binary to the children, both nurturing and disciplinarian, but behind closed doors they enact private passions and acute anxieties. Their characters forge an unsteady partnership throughout the film, but their dedication to the cause of Republicanism and to their charges is unwavering. The two veteran actors imbue their characters with life through gestures and slight expressions, never needing to overact. Across the board, the actors employ a simplistic, naturalistic approach to their roles, and the realism that it brings to a work of fantasy is grounding and makes the film that much more significant. 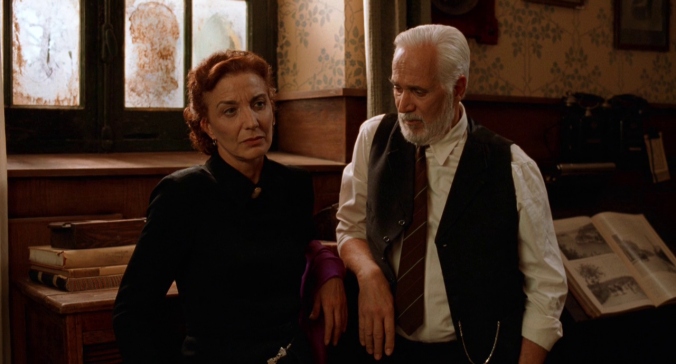 The more I’ve thought about The Devil’s Backbone over the past few days, the more I’ve come to admire about the film. It’s one that always manages to penetrate and stick with me for a while after a viewing. It’s powerful to see a film that can deftly wrap a political statement inside such a sensitive and truly effective dramatic narrative, and del Toro manages that easily with this film. He uses the film’s sad narrative to evoke emotions as disparate as joy, dread, and empathy, while encouraging his audience to read the film on a cerebral level, as well. It’s a beautiful film brought to life by spirited performances from its cast. The film’s visual storytelling and subtle allusions make for a richly rewarding and deep cinematic experience. If I were to rank the 50 or so films that I’ve written about thus far for this project, The Devil’s Backbone would almost certainly have a place within the top 10. It’s a film that many might overlook in favor of del Toro’s later, more celebrated films, but it is a classic in its own right, and not to be missed.