Ang Lee’s wuxia epic Crouching Tiger, Hidden Dragon is a film that I feel should be more foundational in my early film-watching history, but upon some reflection, I’m realizing that I don’t have nearly as intimate a connection to it as I do to some other martial arts films that I was getting into around the same time. Released in 2000, when I was just entering high school, Crouching Tiger, Hidden Dragon came into my life as I was just starting to discover classic martial arts cinema. I believe that I saw the film for the first time at the West Virginia International Film Festival in 2001, after its initial release to universal acclaim and subsequent nomination for 10 Academy Awards. I remember being impressed by the fight choreography and, obviously, the film’s incredible visual beauty, but it lacked the viscerality of the Bruce Lee films that I was starting to watch. At the time, the film’s deliberate pacing and intricate plot weren’t what I was looking for in a martial arts movie, and I’m pretty sure I even dozed off for sections of the film on that initial viewing. Of course, at the time I didn’t have the cultural or filmic context to understand the differences between the wuxia genre in which Ang Lee was working and the more straightforward kung-fu action films that I preferred. Eventually, I’d come around on Crouching Tiger, Hidden Dragon after expanding my knowledge and experience with martial arts films, but I think that my preference has always led me to gravitate more towards the classic style of the 1970s kung-fu action films. However, for wuxia, Crouching Tiger, Hidden Dragon is probably the gold standard.

The film is set in a fictionalized historical China, during the period of the Qing Dynasty. At the film’s opening, retired Wudang master swordsman Li Mu Bai (Chow) has asked his friend, bodyguard Yu Shu Lien (Yeoh), to deliver his sword, the Green Destiny, to their friend Sir Te (Shihung Lung), as a token of his service to Sir Te. Shu Lien’s visit to Sir Te coincides with the arrival of the provincial Governor, whose daughter, Jen Yu (Zhang), is betrothed to be married. Shortly after Jen’s arrival, Green Destiny is stolen, and Shu Lien tracks the thief to Governor Yu’s compound, which leads she and Mu Bai to discover that Jade Fox, a female warrior who murdered Mu Bai’s Wudang master, has been posing as Jen’s governess and training her in the teachings of Wudang martial arts. Though Shu Lien and Mu Bai attempt to stop Jade Fox and Jen, with the help of local police and Sir Te’s private security detail, the thieves are able to escape, and Jen leaves the city with Green Destiny, posing as a man and challenging townsfolk to duels. Shu Lien and Mu Bai pursue Jen, hoping to regain the Green Destiny, avenge Mu Bai’s master’s murder, and also to prevent Jen from going down a path of destruction. The film’s final duels between Shu Lien and Jen, Mu Bai and Jen, and Mu Bai and Jade Fox are thrilling and beautifully shot, with its denouement providing both satisfying narrative closure and a few genuinely touching emotional moments.

My plot summary doesn’t do justice to just how well written and densely-plotted Crouching Tiger, Hidden Dragon is. It’s mostly remembered for its breathtaking visuals and wire-assisted fight choreography, but the film’s script contains deep symbolism, nods to classical Chinese legends and proverbs, and two believable, naturalistic love stories. I think that on my initial viewing as a teen, I had trouble reconciling the film as a martial arts movie with the film as a fully realized motion picture. My experience with martial arts movies to that point was largely limited to seeing the “beat ‘em ups” of Jean-Claude van Damme or Steven Seagal on Saturday afternoon television. I didn’t have a concept of a martial arts film that could go beyond the basic “good guys beating up bad guys” tropes that I was familiar with, let alone one that had the narrative scope of a Crouching Tiger, Hidden Dragon. As I’ve written before about other movies, I just wasn’t ready for this one on my initial viewing. However, I did enjoy the film’s fight scenes and I filed it away as a movie to revisit, which I would often as I continued to indulge my interest in Asian cinema throughout my teenage years.

Watching Crouching Tiger, Hidden Dragon as an adult, I’m struck mostly by the very things that I was turned off by on my initial viewing. The fight choreography as still incredible, especially when compared to the slate of early millennium wuxia offerings that were inspired by this film, but what I was able to appreciate more on this rewatch were the film’s deep emotional themes and the extraordinary, nuanced performances from its principal cast. At the heart of the film are its twin love stories, that of Jen and Lo (Chang Chen) and of Shu Lien and Mu Bai. Jen and Lo are youthful and headstrong, with Jen running away from her arranged marriage to be with the man she truly loves. Shown mostly in flashback, their relationship is innocent and playful, with Zhang playing Jen as coyly enigmatic, both pursuing Lo and allowing herself to be pursued. Though she’s always had the upper hand in the relationship, she depends on Lo’s devotion to make her whole. This power dynamic is revealed subtly in the film through small gestures and glances, with Zhang allowing for small slivers of vulnerability to break through her performance when she shares scenes with Chang. Similarly, Chow and Yeoh portray the complicated, frustrated relationship between Mu Bai and Shu Lien beautifully. Though he doesn’t openly admit his love for her until his dying moments, Mu Bai’s affections for Shu Lien are expressed through the soft way that Chow looks at Yeoh and the gentle way that they interact in their private moments. Both characters are warriors who are honor bound, and they know that to give in to their love could potentially put both of them at risk, but they can’t truly hide the feelings that they share for one another deeply. Their history is only hinted at in the film, but Chow’s and Yeoh’s performances make it clear that they have a long and deep connection. These subtle performances ring true, emotionally, and help to elevate Crouching Tiger, Hidden Dragon above standard genre fare. Ang Lee is well known for culling heart wrenching performances from his leads, and he certainly does that in Crouching Tiger, Hidden Dragon.

Of course, the true calling card of any martial arts film is its combat, and, as I’ve alluded to, Crouching Tiger, Hidden Dragon doesn’t disappoint in that regard. The fight scenes were choreographed by Yuen Woo-Ping, a legendary Hong Kong film director with credits that rank among the classics of the kung-fu genre, but who was perhaps best known to American audiences at the time for having choreographed the fight scenes in 1999’s The Matrix. Aided by the use of wires, Yuen and Lee, craft some memorably exciting and beautiful fight sequences, featuring both hand-to-hand and weapons combat. Although he had been a huge action star for some time in China, this was Chow’s first actual martial arts role, and he acquits himself admirably to the genre. His Mu Bai is graceful and powerful, appearing capable of dealing great damage with relative ease. All of the actors performed most of their own stunts, with Yeoh suffering a torn ACL during filming. The dedication of the cast to faithfully and accurately performing their movements must have made for a grueling and difficult shoot, but the end result is an exhilarating blend of combat, dance, and sheer visual splendor, provided by Lee’s shot choices and fantastical settings. No one who has seen the film can forget Mu Bai’s pursuit of Jen through the bamboo forest, as they lithely leap from tree to tree, stopping only to exchange a few quick parries before making their next graceful bound. Though it may stray from the kung-fu film traditions that I am a bigger fan of, there’s no denying that Crouching Tiger, Hidden Dragon is a martial arts classic. 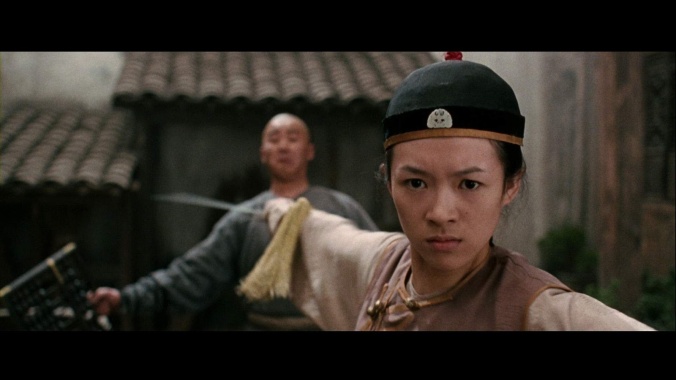 I’m not really sure why I haven’t revisited Crouching Tiger, Hidden Dragon in such a long time. Before watching it for this project, I probably hadn’t seen the film in its entirety in a decade, although it is a film that I had grown to enjoy quite a bit after the mixed reaction I had it initially. In general, I don’t watch the martial arts films in my collection nearly as much as I used to, with Enter the Dragon being the only martial arts DVD that I own that I have watched within the last two or three years. I haven’t lost my fondness for the genre, and when I get into the mood I like to seek out modern kung-fu movies on Netflix, but as my tastes have evolved and grown, martial arts films have become something of an afterthought. I don’t know that I’ll return to Crouching Tiger, Hidden Dragon any time soon, but I am very glad to have taken the time to rewatch it. It’s a film that can be enjoyed by a wide audience, as evidenced by its near-universal appeal, and it really has something for everyone. Lee’s careful treatment of the film’s emotional love stories, breakthrough performances from its principal cast, and incredibly memorable combat and visuals are all contained herein, and add up to a uniquely rich film viewing experience.