Written by: Stanley Kubrick (from the novel by Anthony Burgess)

Some months ago, when writing about 2001: A Space Odyssey, I indicated that Kubrick had been my favorite filmmaker throughout my teens and early twenties. Some recent reexamination and rumination on other major films from that time in my life has probably revealed that though he may have seemed to stand head and shoulders above all other filmmakers in my formative years, it’s likely truer that he was one among a handful of filmmakers that have come to make up my personal pantheon. Regardless, the influence of Stanley Kubrick on my early film viewership is undeniable. I was an instant fan of 2001, and came to hold Full Metal Jacket and The Shining in equally high regard. I became familiar with his earlier work, including masterpieces such as Dr. Strangelove and Paths of Glory, after I came to college. I was a full devotee, and I sought out all of Kubrick’s films in my first couple of years of college, learning to appreciate each one of its own merit. Some I enjoyed more than others, but overall my opinion of Kubrick as perhaps the greatest master filmmaker was more or less cemented. It is probably a bit ironic, then, that the only film of his that still resides in my collection, besides 2001, is one of the few that I truly feel ambivalently about: A Clockwork Orange.

Set in a not-quite-dystopian future London, A Clockwork Orange is a look into a world defined by violence and nihilism, where street gangs are free to brutalize the public. Our window into that world is Alex (McDowell), teenaged leader of a gang of droogs, whose favorite pastimes include rape, murder, and listening to Ludwig van Beethoven. Alex wields his authority over the gang through physical intimidation and takes advantage of the crumbling societal structures to wreak havoc. When the droogs get sick of Alex’s mistreatment, they decide to set him up, leading him to break into the home of a wealthy woman whom he subsequently clubs to death. When he tries to make his escape, the droogs turn on him, smashing a bottle over his head and leaving him to be caught by the police. Alex is charged with murder and sentenced to prison, where he learns of an experimental psychiatric treatment that might reduce his sentence. Alex submits to the Ludovico treatment, in which his eyes are held open by a machine, and he’s forced to watch video of horrific acts of violence and warfare. The treatment leads to a physical and psychological change in Alex wherein he becomes physically ill at the thought of engaging in any of his previous behaviors. Finally deemed sufficiently neutered and reprogrammed, Alex is released back into society. The world that he had left just two years ago seems as different as Alex is after his Ludovico treatment, but have either really changed that much?

Though it is probably one of my least favorite Kubrick film, I can’t deny that A Clockwork Orange is a cinematic work of art. As is every Kubrick film, this is a beautifully rendered and thoughtful film. Its art direction might be my favorite in his whole filmography, with vibrant color splashed across the screen and set designs that are both retro and futuristic at the same time. When I picture the swinging 70s of London, it’s really the design of A Clockwork Orange that I’m envisioning. Kubrick is at the height of powers, using striking visuals to set the tone of his film and also to imply subtle narrative details about the characters and the world.  Early on, the film’s visuals evoke its mood so perfectly, the setting of the Korova Milk Bar oozing sinister dread when we first meet Alex and his gang. The bar’s stark black and white color pattern signify a world that is broken down into dualities: black and white, good and evil, peace and chaos, rule and anarchy. Alex’s worldview, too, is dominated by a duality, chiefly that of the hunter and the hunted. Of course these simplistic visual and narrative points of view belie a layered examination of power dynamics and the inherent role of violence in human nature. 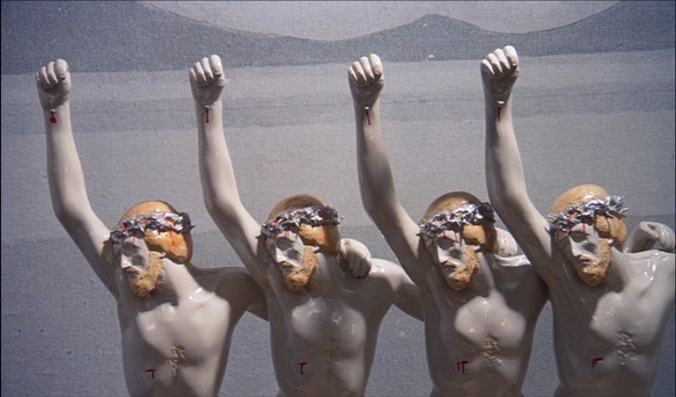 This examination is at the heart of A Clockwork Orange, as we see domination played out in three different ways: initially, individually through Alex’s physical intimidation and domination of his gang, his family, and those around him, subsequently, domination by the State after Alex is imprisoned and subjected to a mind altering experiment, and lastly, a reactionary sort of violence from the townsfolk who exact revenge on the newly humbled Alex. This is an important and continuously prescient line of inquiry for a piece of art to make, but I feel that the ideology of the film gets a bit muddled. Its attempts to be critical of violence as an institution are undercut by the fact that Alex is the film’s ostensible hero, and the fact that the audience is often led to sympathize with and even root for the murderous, rapacious Alex. Malcom McLaren has often claimed that the film was not better received upon its release because people weren’t able to understand that it was intended as a dark comedy, and I can understand where he’s coming from with that comment, because there are certainly elements of satire to the film, but I can’t say that I agree that A Clockwork Orange should be read as a comedy. The film’s gleeful sadism should be repulsive and horrifying, not amusing. I think presenting A Clockwork Orange as a comedy of any sort is a dangerous proposition. I have defended violent, bleak films in my writing before, but I find A Clockwork Orange difficult to defend, its obvious artistry notwithstanding, due to the misconstrued fandom of the film that I have observed, and to the cult of personality that has sprung up around its hero, Alex. 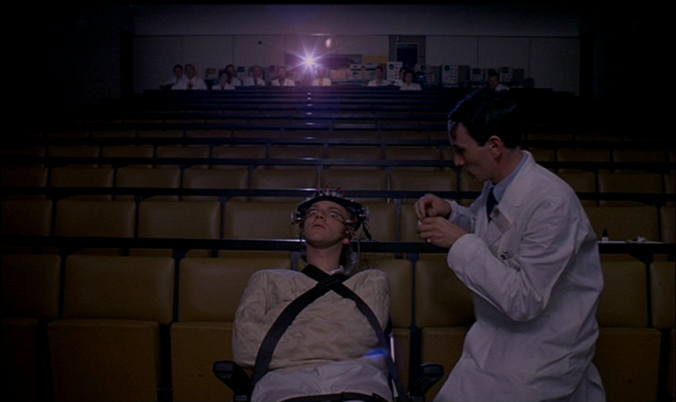 I’ve noticed that most of the fandom surrounding A Clockwork Orange seems to be driven by young men who are enamored with the film’s violence. To these men, Alex has become a counterculture icon, snubbing his nose in the face of authority and daring to live out his most extreme fantasies. I personally find this fandom disturbing, and, unfortunately, I can’t separate the film from its fandom because it seems as if the film does very little to avoid glorifying Alex and the deplorable behavior that he displays throughout. I’m often able to separate art from its creator, or from its fan base, but I have always had a difficult time reconciling my love for Stanley Kubrick with this particular film. I recognize that A Clockwork Orange is an important cinematic work of art, and I appreciate its sumptuous visual palate and its attempts at social critique, but I can’t bring myself to really enjoy the film. Kubrick was never a filmmaker who seemed interested in creating relatable, sympathetic characters, but his characterization of Alex is an anomaly even in a filmography peopled by depraved, morally empty figures. Alex’s entire raison d’etre is violence. He has little depth as a character, and even as a symbol or a metaphor for youth gone wild, he falls entirely flat. Kubrick attempts to make up for this lack of character depth with an emphasis on style and superficial details, but they don’t ring true and Alex is ultimately proven to be hollow. I work for an independently owned craft brewery and we offer a seasonal beer called Milk+, which features tap handle and label artwork inspired by A Clockwork Orange, and any time I have the beer on tap I invariably have customers who order it simply based on the name and artwork because A Clockwork Orange is “their favorite movie.” Sometimes I really wonder if they’ve thought about the implications of the film’s mixed messages. 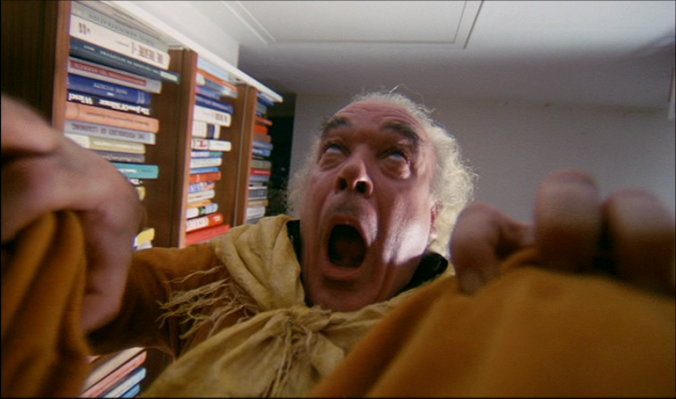 Maybe I’m being overly sensitive, but I feel that A Clockwork Orange is a film that tries overly hard to make its audience sympathize with a totally abhorrent protagonist. More than simply asking its audience to consider the ramifications of Alex’s actions, by not wholly critiquing these actions the film tacitly approves of them. Although all forms of dominative violence seem to be viewed equally in the film, whether they be State sanctioned or individualistic, Alex is clearly presented as the film’s hero and, as a result, his actions are championed, and even justified by the severity of the trauma that is inflicted upon him during the Ludovico treatment. The film masquerades as a critique of violence and authority, but in actuality it seems to be a reactionary fantasy, with Alex’s final rapacious daydream supplying an orgasmic triumph over the film’s moralizing forces. A Clockwork Orange is a film that I wish I could enjoy more thoroughly because it contains some of my favorite moments of Kubrick’s visual genius, but I just can’t get over the hump of the film’s treatment of its subject matter. There’s a reason that the copy of the film that I currently own was still in its shrink wrap when I took it off the shelf for this post, nearly four years after picking it out of a BestBuy bargain bin: A Clockwork Orange is an impressively beautiful film, but I almost never want to watch it.