As will become apparent later in this project when I review the first half of the Friday the 13th series, a few Nightmare on Elm Street films, and, eventually, Texas Chainsaw Massacre, I had a soft spot for horror movies growing up, particularly slashers and gore-fests. This obsession with the macabre goes back to my early childhood and my introduction to the classic Universal monster movies of the 1930s and 40s. I came to love Dracula and the Invisible Man, but particularly Frankenstein’s monster, and I would search the weekly television listings for classic monster movies and record them off of cable late at night. When I was a little older, I’d sneak glances at the Friday the 13th movie marathon that ran every, well, Friday the 13th on the USA Network, and my tastes in scares began to mature and get a little darker, a little gorier. It wasn’t until probably my early teens, maybe 13 or 14 years old, that I first encountered the uniquely weird horror offered up by Sam Raimi. I saw Army of Darkness on television and it was immediately intriguing to me. It satisfied the gore and gross-out component, although it wasn’t really a true horror movie, and it added a strong comedy component that I wasn’t expecting. I liked the movie a lot but I didn’t really come back to it until my later teens. During high school my friends and I would start seeking out more and more hardcore and taboo horror films, often turning to Asian cinema and the emerging torture porn genre to provide these cheap thrills. The first two Evil Dead movies, providing some legitimate scares along with their moments of campy comedy, were acceptable to my friends’ deviant tastes, but the lighter, goofier Army of Darkness was more of a stretch to some of them. Eventually, sometime in high school, I picked up the director’s cut (officially titled Bruce Campbell vs. Army of Darkness, the film’s original title), and would occasionally share it with friends, particularly around Halloween. By my early twenties, this movie, along with most of the horror movies in my collection, had gotten largely shelved. My tastes were changing rapidly and I didn’t see much value in the schlockier elements of my collection at the time. I still don’t go for horror movies too often, but I’ve enjoyed the later films from Raimi and I was happy to go back to one of his classics for this project. 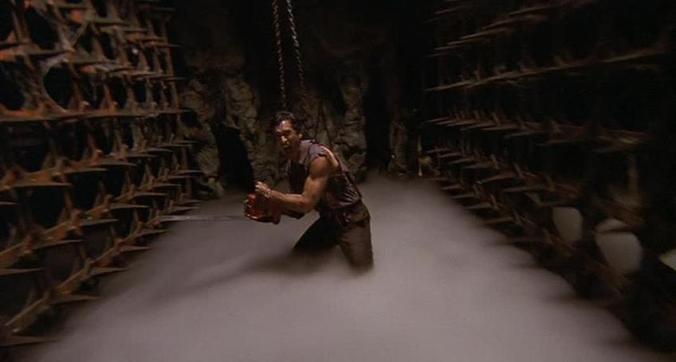 The film picks up immediately after the events of Evil Dead II with Ash (Campbell) being transported to the year 1300 AD. After arriving in the middle ages, Ash finds himself in the midst of a conflict between Lord Arthur (Marcus Gilbert) and Duke Henry the Red (Richard Grove). He is captured by Arthur’s knights who believe him to be a spy of Henry the Red, but Arthur’s Wise Man (Ian Abercrombie), believes Ash to be a hero promised in a prophecy. After being taken prisoner, Ash is taken to Arthur’s castle where he is thrown into a pit to be executed. Ash is able to escape the pit, killing a Deadite with the help of the Wise Man who returns his chainsaw to him. When he climbs his way to the top, he regains his “boomstick,” which he uses to quickly dispatch of another Deadite that attempts to escape the pit behind him. Ash is celebrated as a hero and he garners the affections of Sheila (Davidtz), a beautiful maiden. The Wise Man agrees to help Ash return to his own time, and tells him he must seek out the Necronomicon in order to do it. Ash’s quest for the Necronomicon leads him to battle demons and Deadites, but he finally persists and makes his way to the graveyard where the evil book is stored. However, Ash has never been one for attention to detail, so he has forgotten the magic words that will allow him to open the Necronomicon, and when he attempts to open the book without reciting the words properly, Ash unleashes an army of the dead on the land. Now in order to return to his home, he must defeat the Army of Darkness to save the castle and Sheila, who has been captured by the Deadites.

If that doesn’t exactly sound like the description of a horror movie, that’s because Army of Darkness really isn’t one. Although it does contain a few unsettling or scary moments, for the most part it’s a fantasy movie that leans heavily on slapstick comedy set pieces. The first two installments of the Evil Dead trilogy have their tongues firmly inserted into their cheeks, but they still fall distinctly into the horror genre. For the third installment, Raimi wanted to go in a different direction by getting Ash out of the cabin in the woods and into the larger world. He incorporates the influence of classic fish out of water tales like A Connecticut Yankee in King Arthur’s Court and Gulliver’s Travels, and the end result is a film that is distinctly different from its predecessors while retaining the same attitude and tone. Though he’s traded in the familiar setting of the first two films, plenty of Raimi’s filmmaking tricks are still on display in Army of Darkness. He returns often to the low tracking shots and queasily fast zooms that defined the Evil Dead films, implying the presence of spirits chasing Ash through the woods. He also retains his fondness for jump scares, and the few that show up in Army of Darkness might be the only moments in the film that could induce real terror in the audience. But, of course, Raimi’s most familiar tool is the star persona of Bruce Campbell in his signature role as Ash.

A close friend of Raimi’s, Campbell helped him finance and create the original Evil Dead and has gone on to use his appearances as Ash to launch a career for himself as one of the most recognizable character actors currently working. As the film’s original title would suggest, in Bruce Campbell vs. Army of Darkness, as in the other Evil Dead films, Campbell is asked to essentially carry the load from an acting standpoint. He is the most heavily featured actor in the series by far, and in many of his scenes he is paired with shrieking, nearly nonverbal demons. Luckily, Campbell very easily has the chops to entertain on his own for the film’s 90-minute run time. Campbell plays Ash as a spoof of the hyper-macho action stars of the time, and he delivers his punches as readily as his punchlines, never at a loss for words as the film spawned many catchphrases among horror fans. He is the engine for both action and comedy in the film, as Campbell possesses both the bravado of a traditional leading man, and the rubber-faced, physically performative gifts of an expert slapstick comedian. Raimi knows how to perfectly capture Campbell’s expressive face to render emotions ranging from confidence, to fear, to hysteria and he uses this malleable mug to great effect throughout the film. It’s impossible to imagine the Evil Dead series without Campbell as Ash; another actor just wouldn’t feel right in the role.

Raimi is able to do a lot with a little as a filmmaker, and that economy is on display again in Army of Darkness. Though the film was made well into the beginning of the CGI boom, he chose to use practical effects throughout the movie, employing miniatures and stop-motion animation to create the army of the dead. Though the effects do look a bit dated, they don’t necessarily look bad. In fact, there is a sort of nostalgic charm to the skeletons, as they recall the groundbreaking stop-motion work of Ray Harryhausen. Raimi uses sharp, quick edits to propel the action in the film’s climactic battle between Ash, Arthur’s army, and the army of the dead, led by a reincarnated Evil Ash. These edits allow Raimi to mask the fact that he is employing a very small cast, and maintain the level of action at a fever pitch. Army of Darkness definitely feels like a throwback to a time when film genres weren’t as rigidly codified and swashbuckling heroes could coexist with supernatural demons and beautiful damsels in distress. This is decidedly a B-movie, but it’s a rather well-made one, and an entertaining one to boot. Campbell’s charisma carries over to the entire production, with even some of the animated skeletons delivering throwaway lines that are laugh-out-loud funny.

Army of Darkness is a very fun movie experience, and it’s one that I would probably go back to more often if it weren’t for the terrible quality of the video transfer on the DVD copy that I own. I don’t know if the image quality has degraded over the years, but it’s really difficult for me to imagine myself watching this disc as a teen. There are times when the image becomes so grainy and dark that it’s almost impossible to see what’s going on on the screen at all. This is particularly the case during the film’s final battle, which was entirely shot at night. I’ve watched Army of Darkness on streaming services and it doesn’t seem to suffer from this lack of clarity, so I’m assuming that it’s just a bad transfer on this particular Director’s Cut edition of the DVD. It’s really a shame, because I think the Director’s Cut, with the film’s alternate ending (which is something of an homage to Planet of the Apes) is the superior version of the film, but I just can’t see myself sitting down to watch this particular DVD again anytime soon. I will, however, likely be revisiting this cult classic, along with its predecessors, sometime around Halloween this year, just on a streaming platform. Although my taste for straight horror movies has somewhat diminished, I’ll always enjoy the humorous horror that Raimi offers up here and in his later films, which are equally as good at blending the genres of horror and comedy. I probably enjoy the Evil Dead films a bit more than Army of Darkness, but it’s great in its own right for taking the series in a totally new direction while still maintaining that distinctive early Raimi feeling.

One thought on “Bruce Campbell vs. Army of Darkness”