Around the time that Brick was released, I really wasn’t watching a whole lot of contemporary movies. In 2006, I was just starting to settle into my life in Pittsburgh, having moved here permanently that fall. I was gearing up for my final few semesters of college, and most of my movie watching was done for classes. At that time, I was watching mostly classics and genre films in school, but I still kept my Netflix account for newer movies. Although I wasn’t using it nearly as frequently as I had been in the first couple of years of college, I still made the time squeeze in movies for pleasure, watching them late at night on a laptop, often with a buzz on. This is how I first experienced Brick: receiving a disc in a little red envelope, watching it somewhat distractedly, and sending it back quickly. It didn’t make a huge impression on me that first time, but I did appreciate its transition of a classic noir narrative to the seemingly more benign setting of a high school. I thought it was a good movie, but I didn’t quite agree with the universal fawning over the film that I had read on most of the film and pop culture websites I was following at the time. However, it stuck around in the back of my head long enough that I eventually picked up a used copy of it at the Exchange a few years later. I’m glad I did because Brick is the sort of movie that rewards close watching and gets better with repeated viewings.

Brick’s convoluted plot is a classic noir detective story, inspired by the work of Dashiell Hammett, and featuring the classic tropes of the gumshoe, the damsel in distress, the femme fatale, and the shadowy underworld figures. Johnson chooses to resituate these familiar elements in a new setting, however, placing his mystery in the sunny setting of a southern California high school. Brendan (Gordon-Levitt) is investigating the disappearance of his former girlfriend, Emily (Emilie de Ravin), who he fears has gotten mixed up in some trouble involving a local drug ring. Brendan is a loner, modeled on the classic noir detective, but he is assisted in his investigation by his friend, the Brain (Matt O’Leary), who helps Brendan track down loose threads and connect the dots in the search for Emily. Brendan is able to arrange a meeting with Emily where she tells him that he has to let her go, and to stop trying to save her, but of course he can’t. Brendan steals a note of Emily’s which leads him to a drainage ditch near the high school where he finds her dead body, and he takes it upon himself to find her murderer. Along the way, he meets Laura (Nora Zehetner), a high school socialite who was friends with Emily and who takes in interest in Brendan, though she may be playing both sides. Laura is also friendly with The Pin (Lukas Haas), a local heroin dealer who Brendan believes may have been involved in Emily’s murder. Brendan is able to infiltrate the Pin’s gang and after doing so he’s able to unravel the mystery of Emily’s murder, but the film forms a tightly wound knot that he must unwind to do so. Brick ends like so many classic noir films, with its detective standing alone, having tracked down the answers he wanted, only to be confronted with whole new questions and problems.

One of the most memorable and immediately conspicuous elements of Brick is its script. The film’s dialogue is anachronistically hard boiled, with its teenaged protagonists spouting rapid-fire line after line of tough talk. At first, the wordiness and odd phrasing of the dialogue can be a little tough to adjust to, but it quickly develops into beautiful, florid prose. Johnson wrote the script (originally conceived of as a novella) as a tribute to the work of Hammett, and he captures that authorial voice perfectly. Inserting period dialogue into a modern setting could have come off as a gimmick or a crutch, but the performances of the young cast sell it as authentic. In fact, the dialogue helps to define and create a unique sense of place in the film, creating a sort of fantasy world that these characters are inhabiting. Although it is very clearly set in the real world and its tone and subject matter are dark, Brick also has the feeling of a teenage fantasy, where the adults have vacated and left the children to their own devices. The dialogue enhances this sense of fantasy, giving the impression that Brendan is playing detective, mimicking his favorite films and pulp novels.

The other thing that helps make Johnson’s unusual dialogue choices work is Gordon-Levitt’s strong performance as Brendan. He appears in every scene of the movie, and he carries the movie admirably in a breakthrough performance. Aside from just embracing the period dialogue, Gordon-Levitt embodies the noir detective in other ways. He does a good job of portraying Brendan’s mental processes in a physical, observable way. The viewer can see the wheels turning in his head as he and the Brain meet up behind the school to discuss the details of their case. Although Brick uses a flashback structure, the audience is asked to unravel much of the mystery at the same time as Brendan, and watching Gordon-Levitt portray that discovery is part of the film’s appeal. Gordon-Levitt plays Brendan as doggedly persistent, hell-bent in his pursuit of the truth about Emily’s murder. His performance is equal parts verbal, playing the role of both the conman and the wise guy, and physical, though he isn’t necessarily a man of action. His physicality comes more in his ability to portray a kid who can take a beating. As the movie goes on, Gordon-Levitt often adopts a hobbled gait as Brendan’s frequent encounters with school bullies and lowlifes leaves him on the wrong end of a lot of punishment. Johnson often chooses to focus on his feet as he creates a sort of shambolic ballet, seemingly out of control but all the while possessing a dancer’s grace.

Focusing on characters’ feet is just one of the bold stylistic choices that Johnson makes throughout the film. If the film’s script is totally indebted to hardboiled fiction, its visual aesthetic is something far afield from the typical noir aesthetic. For the most part, Johnson trades in the chiaroscuro and cramped interiors of the classic noir for sunny, wide open exteriors. He frequently chooses to frame his subjects in cutaways, focusing on shoes or eyes, but he returns often to long master shots that dwarf the characters against their environment, be it a parking lot, a drainage ditch, or the startlingly empty high school. If the typical noir used its visual aesthetic to present a world closing in on its protagonists, Brick presents us with a world that is wide open, but rather than representing a freeing experience for the film’s characters, that wide open space seems like a challenge too daunting to overcome. Overall, the film has a kinetic visual style, often employing smash cuts and quick zooms and pans to imply violence or narrative action. The decision to tie narrative point-of-view so directly to Brendan also helps to drive tension, as the audience is left in the dark and has to take the ride along with him. There are several zigs and zags along the way to the discovery of Emily’s killer, and many of the film’s revelations are truly shocking, including its pseudo-twist ending. 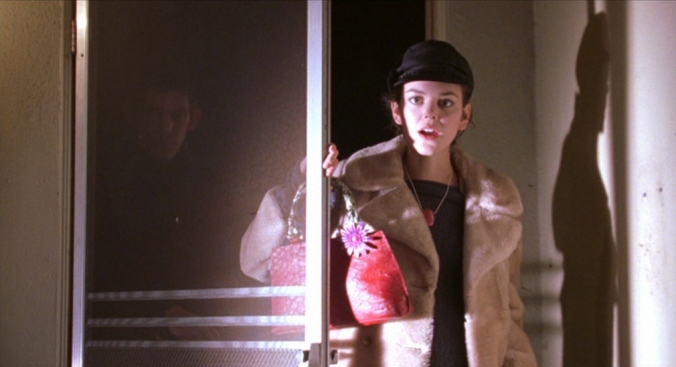 If I had any complaint with Brick, it would probably be that, aside from Gordon-Levitt, the rest of the cast isn’t given enough to work with. Obviously, the film is highly tied to Brendan’s point-of-view and his experience of the world, but that is at the detriment of fleshing out the supporting cast. Haas does give a somewhat interesting performance as the Pin, playing the character with a quiet intensity. However, costuming decisions with the character (he wears a cape and has one leg that is significantly shorter than the other) may be more subtly interesting than anything Haas does with the performance. Emilie de Ravin just isn’t in the film very much. She has an early scene with Brendan where she tries to convince him to forget about her, but otherwise she mostly appears in dream sequences as a silent, reanimated corpse. She was doing good work on LOST as a damsel in distress type of character around the same time that Brick was made, but she simply doesn’t get the opportunities in the film to fully flesh out the role. Nora Zehetner’s Laura should be the most interesting supporting character, as she is ostensibly the film’s femme fatale, and her motives are possibly duplicitous from the start, but she is often reduced to pretty screen filler. She helps Brendan with his investigation and hints that she may be doing so because she’s always had her eye on him, but she rarely rises above the trope of the popular girl who wants to manipulate the class oddball. Ultimately, that’s the biggest weakness of the film. Johnson has created a complicated, nuanced character in Brendan, and that character is brought to life by Gordon-Levitt, but the rest of the cast rarely rise above the standard teen movie tropes of the popular girl, the burnout, the jock, etc. It’s a shame because the film offers up a wholly original take on both the teen movie and the noir, only to be largely peopled with cardboard cutouts.

Overall, though, Brick is a winner. It’s a movie about teens that doesn’t dumb itself down to its audience, instead offering a glimpse into high school life that is artful and fantastical. If you remove the murder from the film, it becomes about a young man trying to come to terms with his girlfriend dumping him and his inability to move on. That’s a relatable subtext for any young person, and it serves as the film’s emotional heart. The bones around that heart are the complex murder mystery that Johnson weaves, and then dresses in the trappings of the film noir. There are a lot of constituent components to Brick, but they ultimately combine to form a film that embraces and elevates its influences. It’s full of subtle allusions to classic films, but it is never derivative thanks to Johnson’s kinetic visual style. The director’s continued stylistic evolution, genre experiments, and knack for storytelling and world building has now landed him a spot helming the next film in the Star Wars saga, but his debut is still probably my favorite film of his. Despite its small budget and relatively unknown cast, Brick had all the indications that its director and star would be on to bigger things very soon.