Mel Brooks is one of the great masters of film comedy, and I was a fan from early in childhood. I don’t know if I saw Young Frankenstein first or Robin Hood: Men in Tights, but those were the movies that introduced me to Brooks’s brand of humor, both broad and witty, high- and low-brow, verbal and slapstick. Half of the jokes went right over my young head, but it didn’t matter because there were so many jokes. Some of the simplest jokes in Mel Brooks’s movies are the best, and thinking back on it, I think my love of comedy probably came from the “walk this way” gag in Young Frankenstein. It’s such a simple, stupid sight gag, but it works perfectly and it’s laugh out loud funny. From there, I started getting really into comedy. I became interested in comedy as a type of art, and in what really made certain things funny. Sometime in the mid-90s, Comedy Central was added to our cable package and I started watching stand-up and tons of classic comedies. Somewhere along the line, I must have encountered Blazing Saddles, but I can’t remember the first time specifically. I’m sure it was on some lazy morning or afternoon during my summer vacation from school while my parents were at work, but I don’t really remember watching Blazing Saddles until I was a little older, probably 14 or 15 and going into high school. It wasn’t until that age that I was really able to appreciate the movie for the kind of masterpiece that it was, anyways.

I know that I watched the movie at least a few times during high school, but it wasn’t until it was screened in a film class that I took my senior year of high school that the real comic genius of Blazing Saddles sank in for me. The class helped to put the movie into a proper context for me. It introduced me to some of the classic Westerns that Blazing Saddles was sending up, and also to some early classic comedies to help put the film into a historical context in that sense. Thinking back on it, it was pretty amazing that my public high school in West Virginia offered a film class at all, but I was lucky that it did because it would be a very formative experience for me. I have that class to thank for introducing me to so many great American films, as well as a handful of foreign classics, and for cementing my desire to pursue an education and a career in film. The class was a senior-only elective that was taught by an English teacher with a particular interest in movies, and she varied the curriculum, including silent films, art house, and classics both new and old from all genres. It was great. 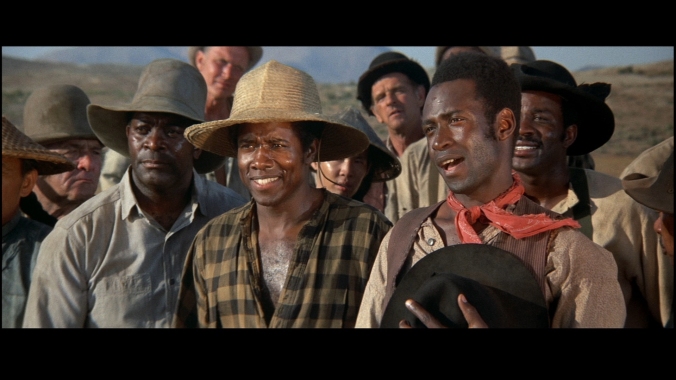 The film stars Cleavon Little as Bart, a railroad laborer who becomes the first black sheriff in the West. Bart is installed in his position by the corrupt Hedley Lamar (Korman), who is hoping to undermine the town of Rock Ridge and drive out its citizens so that he can buy up their property and profit in a land deal when the railroad passes through the town. Bart is in the unenviable position of being a black man in a frontier town full of white people (who all seem to be related), but he eventually is able to win them over just in time to defend Rock Ridge from Lamar’s schemes. Unable to shake the town’s confidence in Bart, Lamar decides to recruit an army and take Rock Ridge by force. With the help of Jim (Wilder), a once-famous gunfighter who is now Rock Ridge’s resident drunk, and his old friends on the railroad, Bart is able to conceive of a plan to save Rock Ridge from Lamar and his minions. In classic Western fashion, they construct a fake town, rig it with dynamite, and when the army attacks, they blow men and horses alike sky high. A chaotic brawl ensues with the characters spilling out of the film, over the fourth wall, and into the “real world.” Eventually, Bart and the Kid meet back up in the world of the film (after taking a break to watch a bit of it in the movie theater), and, in a closing act fitting for Western heroes, ride off into the sunset…in a limousine.

The film’s humor is all over the place, and it is one of the most jam-packed comedies that I’ve ever seen, with only Airplane! possibly packing more jokes into its scant runtime. Blazing Saddles, and nearly all of Brooks’s comedies, acts as a catchall for 20th century comedy. It embraces the shtick and musicality of Brooks’s roots as a Borscht Belt comedian, the physicality of slapstick, high-brow conceptual humor, and pointed social satire. It’s the kind of movie that can surprise you on repeat viewings with new jokes, because you missed them while you were busy laughing at the other jokes. In addition to acting as a repository of American comedic tradition, Blazing Saddles also acts as a deconstructive tool for traditional myths of Americana in general. Brooks takes the traditional American Western film and turns many of its tropes on their heads to provide a commentary on the false nature of those American creation myths. For him, the frontier was not a promised land, peopled by cowboy heroes conquering nature through sheer force of will and determination. It was, instead, peopled by white men too boorish or corrupt to recognize the basic human decency of another man simply because his skin is a different shade.

Watching Blazing Saddles in school, in particular, felt somehow subversive. Not only was the film’s humor too cutting edge for a classroom setting, even thirty years after the fact, its social and political commentary felt progressive in a modern setting as well. The film’s take on race relations in America felt as fresh and accurate in 2004 as it must have felt in 1974, unfortunately. The film’s treatment of racism, while humorous, is rightfully complex. In Blazing Saddles, as in real life, bigotry is the mindset of the ignorant and the crass. The townsfolk of Rock Ridge, aren’t painted as cruel or unsympathetic people, but more as simpletons. They are uneducated, likely inbred, and fearful of anyone different than themselves because they have been fed a steady stream of misinformation about other groups of people. After they realize that Bart is a just, kind, and capable sheriff, they begin to warm to him, although only inasmuch as he is able to help them out of their own bad situation. For his own part, Bart has to prove himself doubly capable, just as many minorities today find that they have to work twice as hard in order to gain the same achievements as their white counterparts due to false biases against them.

I think that the great achievement of Blazing Saddles, however, is in pointing out the roots of bigotry and intolerance. While the townsfolk are ugly and crass, their racial hatred is stoked by the desires of the film’s true villain, Hedley Lamar. He attempts to use racism as a tool to help him achieve his political and capitalist goals, installing Bart as the sheriff in an attempt to destabilize the status quo of Rock Ridge enough that he can swoop in and profit from others’ losses. Bigotry is a tool that has been used by the upper class to fragment the working class for centuries, and Blazing Saddles depicts this truth subtly and perfectly. Race is a social construct used to divide people who should otherwise be working together for mutual benefit, and keeping people of different ethnicities and skin colors fighting amongst themselves has been key to maintaining a status quo in which the same wealthy land and business owners reap the most benefit. There is no room for equality in capitalism. While people are all, obviously, biologically the same, it is in the benefit of the ruling class to uphold the myth of racial difference.

One of the best and easiest ways for people to step outside of their comfort zones, racially speaking, is to engage with art that is made by and about the lives of people who may come from a different ethnic, racial, or socioeconomic background than themselves. One of the greatest things a movie can do for an audience is introduce them to a new way of thinking or open their eyes to a different way of life than they might be accustomed to. I was lucky to grow up in an open-minded household where people of all shapes, sizes, skin colors, and walks of life were welcomed and celebrated. I had and have friends from many different backgrounds. I am happy to live in a world that is diverse and multicultural, because I think that experiencing other cultures and other types of people inherently makes me a better and better-rounded person. But for someone who is not as sold on the values of inclusivity and equality, seeing a movie with a strong or relatable black protagonist might be the first step to some sort of understanding. I’m in no way making apologies or excuses for people who hold racist or bigoted beliefs, because I don’t think there is any place for that sickness in a modern free society, but I do know that there are people who eagerly accept the information that is provided for them without seeking out counterpoint or clarification because they simply don’t know any better. Vitriol can be persuasive, but so can humor. Sometimes the easiest way to someone’s heart is through their funny bone. I think that maybe Mel Brooks had this in mind when he made Blazing Saddles.