Belly is probably the worst movie, objectively speaking, that I have written about for this project to this point. The first and, to date, only feature film from acclaimed music video director Hype Williams is a bit of a mess, but it also serves as a showcase for Williams’s distinct visual aesthetic. Belly is a stylish crime drama that follows childhood friends Tommy (DMX) and Sincere (Nas) as they pursue fortune and street rep through drug deals and armed robbery until their lives ultimately diverge following Sincere’s decision to get away from his life of crime. The premise is simple to the point of being derivative, but the film’s kaleidoscopic visual style makes it memorable and gives the typical gangster narrative a new coat of high gloss paint. I find myself watching Belly more frequently than many other, better, movies in my collection because I enjoy its frenetic editing, moody color palette, and memorable visual style. It’s a fun movie in spite of its many glaring flaws, and for hip hop fans of a certain age, it’s a certified classic.

Starting with the good, Belly is full of visually interesting and memorable scenes. As I mentioned, Williams rose to prominence as a filmmaker by becoming one of the most prolific and acclaimed music video directors in hip hop in the 1990s. In many ways, Williams defined the visual aesthetic of hip hop during the mid- to late-1990s, a period in which the style fully crossed over into the mainstream. Over the course of his early music video career, Williams developed an eclectic but recognizable style while directing some of the most memorable videos in hip hop history. That style is fully developed and stretched out over the course of a feature film, and Belly is a natural extension of Williams’s music video work, portraying both the gritty street-level realities of its protagonists’ lives of crime and the opulence that that lifestyle has afforded them. Williams captures the drama with technical proficiency and visual flair, opting for dramatic, evocative lighting choices, and employing a restless, moving camera to reflect his characters’ mindsets. 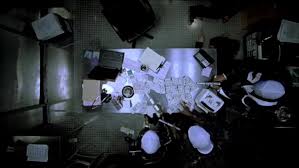 The film’s opening heist scene is a perfect example of this stylistic virtuosity. The scene, in which Tommy, Sincere, and Mark (Hassan Johnson) murder several people while robbing a strip club, sets the narrative and visual tone for the film. The men approach the club in slow motion, though the pace of the editing is quick, with the camera changing angles and distance from its subjects frequently. The quick cuts continue as the three step into the club, but the film’s color palette shifts to an eerie blue, with the black lights of the club causing a negative effect. The close up shots of Tommy and Sincere’s faces are striking and otherworldly, with their eyes glowing hot-white under the black lights. The camera’s constantly shifting perspective, the reversed color palette, and the frequent lens flare from the club’s strobe lights all combine to create a disorienting feeling and a fragmented sense of place. The action shifts upstairs to the club’s office, where the owners are counting cash. The shots lengthen and the camera moves in short, smooth pans and tilts, exploring the room and the cash within it slowly, in contrast to the choppy snapshots of the club floor. Williams continues the longer shot durations as Tommy and Sincere step into the club’s bathrooms where they’ve stashed their guns, a la The Godfather, but he also maintains the disorienting effect and creates visual tension by intensifying the strobe. As Sincere and Tommy approach and ascend the stairway to the office, the strobe is diminished, allowing for more visual clarity. Sincere nonchalantly shoots a bouncer in the chest and after he and Tommy throw him over the stairs, they and Mark charge up the stairs pulling white masks that glow in the black light over their faces. Panic breaks out in the club, and the strobes return, matched by the flashes of the robbers’ guns as they burst into the office and shoot everyone inside. One of the owners falls backwards through the wall-length window overlooking the club floor, descending in slow motion into the blue-lit depths as glittering shards of glass cascade after her like a diamond rain. As she smashes through a table, the beat to “However Do You Want Me” by Soul II Soul, the a cappella intro to which has been seething quietly under the scene up to this point, kicks in, and the film shifts back to a naturalistic color pattern as the men grab the cash and make their getaway. This scene establishes the visual and narrative themes that the film will explore in less than three minutes, and is one of my favorite credit sequences ever. 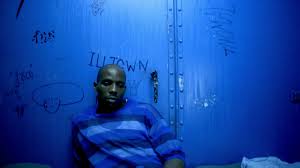 Belly is a film of visual contrasts. Williams associates characters with different colors throughout the film, using blue lights to establish a cold, menacing aesthetic for Tommy, reflecting his ruthlessness and predatory nature. Sincere is visually linked with warmer reds and yellows. He will eventually break with Tommy, rejecting the life of crime for Afrocentrism and attempts at self-improvement. Williams also employs contrast within the same shot by pairing slow motion with quick edits, as he does in the opening robbery scene. These are recognizable music video techniques, and it is obvious at times that Williams’s background is in music video. Often the film seems to be constructed of vignettes, moving from set piece to set piece, and often these vignettes are tied to memorable use of music. These aren’t criticisms, necessarily, as Williams’s experience matching sound to image creates some perfect scenes that almost act as music videos within the film. “However Do You Want Me” is integral to the success of the film’s opening, with the edits syncing perfectly to the music, and the music helping to inform the images. Williams is playing to his strengths in Belly, and while they don’t necessarily lend themselves perfectly to coherent narrative filmmaking, they are enough to keep the film interesting and entertaining.

I think that most of Belly’s shortcomings are a result of Williams wanting to squeeze too much into his first feature. Williams brings a laundry list of influences to the project, many of which he borrows from liberally, resulting in a film that is jumbled and incoherent. There are too many narrative threads, all of which are underdeveloped. This kitchen sink mentality makes the film’s narrative difficult to navigate, as the action shifts from New York to Omaha to Jamaica, following Tommy as he continues to involve himself deeper and deeper in the criminal underworld. Williams too often relies on voice over narration from Sincere to provide context and exposition. For a filmmaker who is so prodigiously gifted visually, Williams often opts to tell rather than show in Belly. With more focus and character development, Belly could be a very good crime film, but as it stands the film only scrapes the surface of its potential, choosing to emulate other, better gangster films and trade in clichés and heavy-handed symbolism rather than developing complex characters and original narrative arcs. 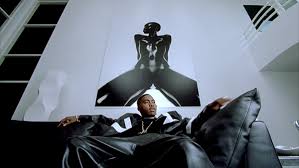 The film also suffers from the performances of its leads. Across the board, the acting in Belly is pretty bad. DMX and Nas aren’t asked to do dramatic heavy lifting in the film, still neither is up to the task. Belly marked the onscreen debut for both rappers, and they are essentially each extending their brands in the film, playing characters who closely resemble their on-record personae. DMX’s physicality lends Tommy’s air of menace credibility, but his line delivery is wooden and he is incapable of registering any facsimile of genuine emotion. Nas seems to be a somewhat more natural actor, but he has to contend with bad dialogue and with the film’s overreliance on his voice over. When he’s not asked to be the film’s narrator, his performance is decent. The lone bright spot in the film, performance wise, is Method Man’s turn as Shameek, a hitman who is sent to Omaha to dispatch of the local drug dealers who reported on Tommy’s drug trafficking operation. In this early role, Method Man displays the charisma and acting chops that helped him cross over into a successful film and television career. He plays Shameek as a joker whose easy charm belies his underlying penchant for violence. He has made a career playing these sorts of lovable, relatable criminals and he shines through in what is essentially an extended cameo. In fact, aside from Tommy and Sincere, the roles in the film all feel like cameos. None of the other characters are given enough screen time to develop any real motivations or character arcs. Sincere’s girlfriend Tionne (T-Boz) serves no actual narrative purpose in the film, while Keisha, Tommy’s girlfriend, is ostensibly a femme fatale, but Taral Hicks’s performance is more sultry than sinister.

Despite these legitimate criticisms of it, I will still continue to enjoy watching Belly. I’m sure it’s obvious by now but I am a big fan of the visuals of this film. Williams’s stylish direction helps to elevate what could otherwise have been a derivative and uninspired gangster film. Even when Williams is shamelessly ripping off his influences, as he does with de Palma’s Scarface for Jamaican kingpin Lennox’s (Louie Rankin) death scene, he makes the homage distinctive and memorable. The female assassin Chiquita who slits Lennox’s throat is memorable despite having less than 30 seconds of total screen time because of the way that Williams frames her visually. As I mentioned, Williams’s skillset doesn’t necessarily lend itself to crafting a complex narrative film, but they are perfect for creating intensely memorable images and translating simple bits of information through visual cues. The audience feels like they know Chiquita despite her limited screen time because her appearance, wearing a spiked collar-style necklace with dermal piercings adorning her face like war paint, conveys simple visual information so well. This is a skill that Williams has translated from music video where meaning must be conveyed simply and easily through the image, or through its relationship to the underlying song. 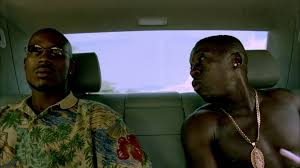 I think Belly’s reliance on music video tropes actually enhances my enjoyment of the film, because it reminds me of a time in my life when I was beginning to really immerse myself in hip hop culture, around the time that the film came out. Belly was only a modest box office success in 1998, but hip hop in general was experiencing one of its biggest boom periods. I really discovered hip hop as an early teen through Puff Daddy, Ma$e, Master P, Nelly and other popular rappers of the day. Hip hop culture was the dominant culture when I was growing up, and I have fond memories of sitting in my friend Ryan’s bedroom and listening to rap CDs on his oversized stereo. His older brother would pack their multi disc stereo with all the newest rap albums and we would soak them all in. Although I gravitated more and more towards punk rock and heavy metal music as I got older, I never lost my love for hip hop, and in particular the rappers who were popular when I was aged 12-15. This nostalgic attachment to that time period certainly helps to overlook some of the flaws in Belly. It’s a movie that is inextricably tied to that time period, and I like to pull it out when I want to turn my brain off and enjoy a well shot action movie that reminds me of one of the passions of my youth.

I apologize for the quality of the stills in this post. I couldn’t find too many great quality screen caps from the film, and the few that I did choose to use were automatically compressed to a smaller size. I’ll try to find a way to fix this and avoid the problem in the future.