This is a film that I was only introduced to within the last five years, although it has quickly captivated my interest and is on its way to becoming one of my favorite movies of all time. Sometimes there are just those films that when you see them for the first time, you know. You think, “This is something special. This one is going to be sticking with me for a long time.” Or at least, that’s the way I have felt about certain films. 2001: A Space Odyssey is one such film that I’ve written about on this blog. It wormed its way into my brain, causing me to ponder its mysteries and consider the message of its philosophy for years to come. Au Hasard Balthazar did the same thing to me, but on an emotional level, rather than a cerebral one. Since I first saw this simple fable about the life of a donkey, it’s been one of the few films to consistently move me in an emotional way every time I view it.

Au Hasard Balthazar follows the life of the titular Balthazar, a donkey, and his owner Marie (Wiazemsky) as they grow up and begin to experience life together. Set in a small French farming village, the film is a pastoral fable, exploring themes of human cruelty, suffering, and absolution. Throughout his life, Balthazar has many masters, most of whom treat him with a mixture of indifference and outright cruelty, however, he always returns to Marie, the only human who has ever shown him true love and care. Marie’s own journey in the film, growing from a girl to a woman, parallels Balthazar’s, as she also learns lessons about the capacity of human beings for abuse and cruelty from her “masters,” her father (Philippe Asselin) and the criminal, Gerard (Lafarge), with whom Marie pursues a relationship. At times, Au Hasard Balthazar can seem to be a grim and bleak look into the cruel power that the strong hold over the weak and the helpless, but its ending does hint at the possibility for the meek and the humble to obtain a reprieve from terrestrial sufferings and, ultimately, a form of redemption. 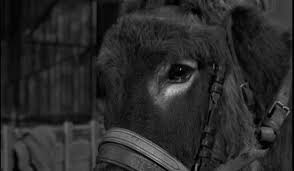 While this might sound like an over-simple description of the film, Au Hasard Balthazar is just that simple. Bresson is a highly minimalist filmmaker, and the apparent straightforward simplicity of his films often belies their symbolic depths. Underneath the mundane, realist surface of Balthazar lies a wealth of truth about human nature, and the capacity of human beings for achieving redemption and absolution in life. I think these hidden depths are what have so attracted me to the film since I first encountered it in 2013. It’s hard to believe that, presented in such a simple package, a film could contain so much of the human experience, but it’s all there in Balthazar, from birth to death. Bresson manages to capture the essence of human emotion through his animal protagonist, and provides the viewer, through Balthazar, with a blank surface upon which to project their own hopes, fears, and beliefs about life.

Bresson’s Catholicism is often mentioned when discussing his films, particularly Balthazar, as it is so overtly concerned with suffering and redemption, but I have never had much interest in the religious overtones of the film. It is impossible to completely avoid discussing the religious subtext in the film, but I am much more interested in considering the humanistic implications of its themes. Jean Luc Godard once referred to Bresson as the “Grand Inquisitor” of cinema, and by that he meant that Bresson’s films are able to get the very core and essence of the human experience. Though Bresson is largely known for his Catholicism, watching his films truly reveals him to be a Humanist. The films of Bresson, particularly Balthazar, are some of the best examples of film as a humanistic art. A great film can do many things, but one of the chief achievements of the best films is to help the viewer to understand their own humanity, or the human experience of those unlike themselves, on a deeper level. All great art helps to reveal aspects of the humanity of both its creator and its audience, but through its ability to recreate life with photorealistic integrity, the cinema is the art form with the most revelatory capacity when used correctly. With Balthazar, Bresson is at the height of his powers as an “inquisitor” of the human spirit, and in the film he exposes both evil and purity at the heart of human nature. 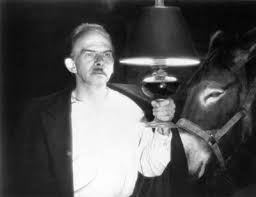 Balthazar was not my first experience with Bresson. I saw Lancelot du Lac (1974) in a class my freshman year of college, but it didn’t have a huge influence on me at the time. I remember thinking that the film was interesting, but it didn’t drive me to seek out more Bresson, nor did I have chance to encounter one of his films again until I sought out Balthazar nearly a decade later. I became aware of the film after seeing the most recent Sight & Sound greatest films poll in 2012. The list, published by the British Film Institute and updated every ten years, is voted on by hundreds of filmmakers, critics, archivists, programmers, and other industry professionals. I’ve enjoyed looking back at the Sight & Sound polls to chart the changing of critical tastes over the decades and also to see how the accepted “canon” of great films has shifted over the years. When I was reading through the 2012 version, I found in the 16th spot a film that I had never heard of before with a provocative French title that caught my eye and captured my imagination. I had no idea what it was about and, my French being more than a little rusty from high school, I didn’t even know what the title meant, but I decided that moment that I needed to see Au Hasard Balthazar. It was probably the best cinematic hunch that I ever acted upon.

I waited for the Criterion Collection to have one of their periodic half-price sales and I purchased Au Hasard Balthazar on DVD in the spring of 2013. In the time between discovering Balthazar and actually seeing it, I had done plenty of reading about the film. After having read critical essays about Bresson in general, and this film in particular, I went into my initial viewing with high expectations that were immediately exceeded. I fell in love with Balthazar immediately. Bresson’s shots of the donkey’s soulful eyes penetrated me on that first viewing. I felt that those eyes contained the wisdom of the ages. I felt that the film contained some key to understanding the mysteries of the Universe. I watched it three times in a week, eventually taking screening notes. A film hadn’t impacted me this much in a long time. I felt like I needed to write my way to the middle of Balthazar, as I had done before with other films that vexed me in this way, but I couldn’t find a way in to the heart of Bresson’s masterpiece.

That summer, I expanded my exploration of Bresson’s work, viewing both The Trial of Joan of Arc (1962) and Mouchette (1967) shortly after my initial experience with Balthazar. I began the process of sketching out a long format essay on the three films, which Bresson made in succession, and their formation of a triptych exploring the role of suffering in the human experience, and its necessity in the process of humans receiving ultimate absolution. My overall thesis was that the films showed an increasingly pessimistic viewpoint on the part of Bresson, depicting increasing instances of human suffering while offering fewer opportunities for salvation. At the time, I simply didn’t have the depth of understanding of Bresson’s Catholic faith to attempt to approach these films from a religious standpoint, but I felt it to be the best path towards understanding them. I ultimately scrapped the project, because I didn’t have the words to begin to adequately describe Balthazar. I still don’t. However, despite my failings to write my way to a full understanding of the film, Balthazar never left my mind. I still watch the film at least twice a year, and there is rarely a week that goes by that its images and themes don’t pop into my head. 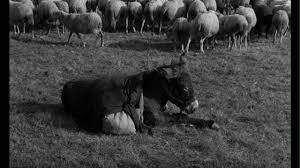 As I said, I still don’t have the words to really describe Au Hasard Balthazar in any meaningful way. In its simple story and minimalist images, the film contains the whole of human experience. Through the eyes of the innocent, naïve Balthazar, we see the true nature of the film’s human characters. Their capacity for love and for malice is showed through their actions toward this harmless, humble beast. Balthazar entered my life at a time when I was beginning to reengage with cinema in a serious way, having started to write about film again only about a year prior to seeing it. I had hoped that my fervor for the film would spark me into writing more lengthy criticism, but instead it pushed me into discovering many other classics of the great 1960s and 70s international art house boom. Before beginning this blog, I hadn’t written anything formal about movies since my inability to work through Au Hasard Balthazar. I would occasionally take some screening notes, or maybe jot a few paragraphs down about a film that I had seen, and I made a habit of creating a top ten films of the year list that I put a lot of thought into, but I didn’t feel able to sit down and really get to the business of writing about movies. Instead, I watched hundreds of films, new and old, but I always came back to Balthazar, each time letting it entrance me the way that it had the very first time. I’ve finally been able to spill a little digital ink on the film, and in a way it’s freeing. I know that I’ll never really be able to fully express my feelings for Au Hasard Balthazar because the film is simply too big. I love too many aspects of the film to ever inventory them all, and its brilliance exists on a level that I am unable to approach. After having been introduced to thousands of films and having spent years studying the medium, it wasn’t until I saw Au Hasard Balthazar that I truly understood the dizzying heights that the cinema could achieve. To me, the film is the Platonic ideal of cinema, conveying the very essence of humanity recorded on film. I am not totally sure that Au Hasard Balthazar is my favorite film ever, though I truly think it may be, but I do know that it is the most important film in my life.