21 Grams focuses on the aftermath of a fatal accident that brings Cristina (Watts), Paul (Penn), and Jack (del Toro) together in tragic fashion. All three of these characters bring a cargo hold’s worth of baggage into the film, but when Cristina’s husband and daughters are killed in a hit-and-run accident, their lives begin to spiral out of control and intersect as they circle the same drain. Paul, who is in the final stages of a terminal illness, is temporarily saved when he is transplanted Cristina’s husband’s heart, leading him to seek her out and begin a relationship. He becomes dragged into Cristina’s quest to get revenge on Jack, an ex-con who had been born again and was attempting to turn his life around when he caused the accident that killed Cristina’s family. Through these three characters, and their intertwining tale of redemption and revenge, Inarritu and Arriaga explore themes of death, grief, responsibility, and faith. 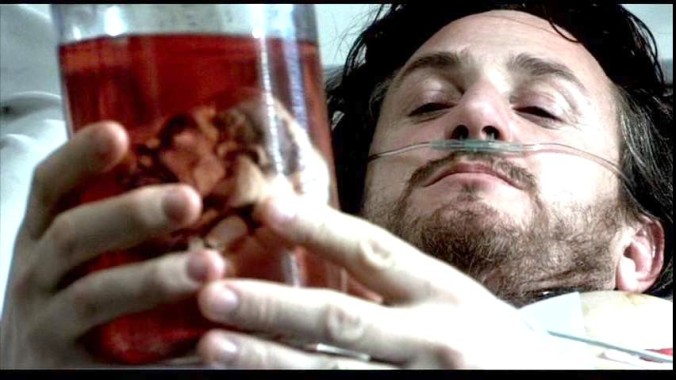 The film’s theatrical release was in November 2003, the beginning of my senior year of high school, although I’m sure it probably never made its way to the small town in West Virginia where I grew up. My first introduction to 21 Grams (and to most of the films I will write about here) was on DVD. The late high school years were the beginning of my development into a true cinephile, fueled by the easy access to anything I could imagine on home video, and the relative low cost of collecting DVDs at the time. My tastes at the time were somewhat eclectic; my collection was comprised mostly of classic American cinema (heavy on the American New Wave), 1990s independent cinema (heavy on Tarantino and the Coens), kung-fu movies, horror, and a scattering of basic contemporary “indie” cinema. My tastes in that last category could basically be described as enjoying films with non-linear narratives (Memento, Eternal Sunshine of the Spotless Mind), maudlin viewpoints or mopey protagonists (American Splendor, Punch Drunk Love), narrative synchronicity (Magnolia), or some combination thereof. I also had a great fondness for Focus Features releases at the time, so even without having seen more than a trailer, I confidently purchased 21 Grams sometime in the spring of 2004.

That spring and summer I know I must have watched this film a half dozen times. I watched it alone, I watched it with friends, with my girlfriend. At that time, it’s quite likely that I might have listed 21 Grams among my favorite films, right alongside Fight Club and Trainspotting. 21 Grams distilled so many of the generic tropes and narrative tics that I was fond of into their perfect form. Its story is presented in a jumble of scenes, jumping backward and forward in time, requiring and rewarding close watches as the interconnections between these characters are developed and revealed. The titular 21 grams refer to the weight that a person loses upon death, the weight of the soul leaving the body. The film’s central thematic conceit, what is the true weight of a life, or of a death, seemed like a puzzle to be solved. At that time, 21 Grams was certainly my favorite film featuring Naomi Watts, and I already owned Mulholland Drive, a film that is undoubtedly one of the greatest of the 21st century and probably my favorite film of all time now. 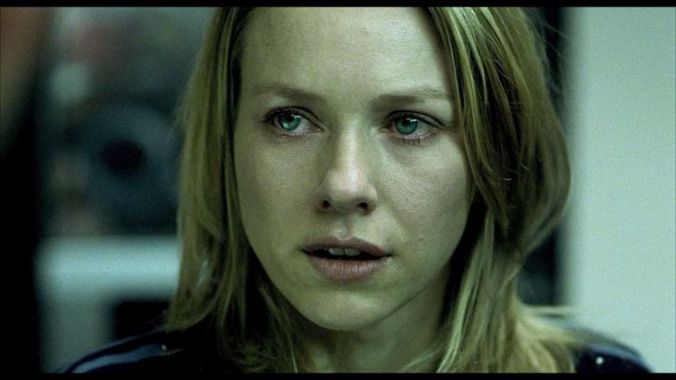 I say all of that, to now say something that is probably obvious at this point: somewhere along the way, my strong affection for 21 Grams soured. I moved to Pittsburgh in the fall of 2004 to study film, and over the course of my first year living away from home, and my first year truly immersing myself in a culture of watching films seriously, my tastes began to develop and change. I split a Blockbuster movie pass with my friend, Brian, and we abused the Hell out of it, sometimes renting three movies a night from the Blockbuster on Forbes Avenue. I was so busy exposing myself to new ideas that I rarely went back to many of the DVDs that I had brought to college with me, often treating them like comfort food, and 21 Grams was certainly lost in the shuffle. I mentioned it earlier alongside Fight Club and Trainspotting as a favorite of the time, and those stayed relevant much longer because of their status as “new classics,” and their visceral, fun styles. The languid pace, morbid tone, and philosophical bent of 21 Grams didn’t lend itself to providing relief in my more serious film schedule, so I always passed it up.

Over the years, and without another viewing since 2004/2005, I began to think of 21 Grams as being built around a somewhat trite formal conceit, its non-linear structure, and using that to prop up an otherwise flimsy narrative overwrought with philosophical import. I felt that its twists were unearned. After so many viewings, its revelations were trite. I suspect that that opinion initially formed after being largely unimpressed by Inarittu’s follow up film, Babel. That film is much of the same, exploring the same grand philosophical themes of 21 Grams through a more linear, but globe spanning, narrative. The failures of Babel to break new ground, and my general distaste for the film over the years, confirmed my bias against 21 Grams, and as such I hadn’t watched it in over a decade until it came time for this project. 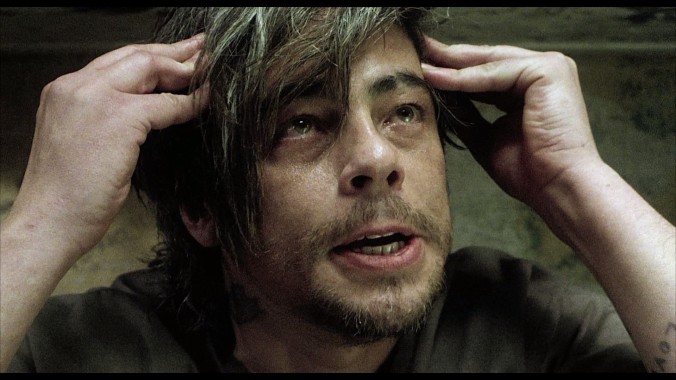 Overall, I was pleasantly surprised by how much I did like 21 Grams. There were times when the film felt a bit self-important, but I had forgotten just how great the performances from all of the lead actors were, and that really helped to make up for some of the overly weighty dialogue. Watts’s performance feels like an exposed nerve, and del Toro is totally convincing as Jack, whose loss of faith after killing Cristina’s family was the most interesting character arc in the film for me. I had also forgotten the film’s visual style, which evokes a sense of total despair as the characters’ lives unravel. The visual palate, alternating from cold, blue interiors, to sun-bleached, yellow exteriors in the desert, is striking. While his later work has gained him critical accolades, I feel that 21 Grams may be Inarittu’s best film, and I think it is certainly the best of his early career triptych, formed by his partnership with writer Guillermo Arriaga. For me, personally, Inarittu’s films have provided diminishing returns since 21 Grams, as he has become a visually masterful director, who increasingly leans on his own screenplays to the detriments of the films overall. Perhaps another multi-film partnership with a talented screenwriter could push Inarittu away from being such a technical wizard and back into making more rewarding, and well-rounded films. While it certainly doesn’t hold up to the early regard that I had upon first seeing it at 18, 21 Grams really does have some pretty impressive performances and the groundwork of Inarittu as a visual auteur of the cinema is apparent in its style. But, like much his later work, the narrative is never as compelling as the impressive style, and the film’s themes and philosophy are both too broad and too vague. I likely won’t go back to 21 Grams anytime soon, but I was glad to have the opportunity to reevaluate it.