I’ve written before about the breadth and depth of Coen Brothers’ filmography. Blood Simple is a perfect example of that depth. Their debut film, it serves as an artistic statement that would define the scope of their career. It finds the brothers arriving on the cinematic scene, nearly fully formed. Though later works would achieve more popularity or prestige, Blood Simple stands out as one of the great debuts in all of film, resembling more the work of an established filmmaker at the height of his or her powers than the first offering from a couple of neophytes. It establishes their interest in genre filmmaking, and many of their trademark cinematic devices appear in the film, at least in rudimentary forms. Far from serving as a still-developing sketch, or an indicator of potential artistry, Blood Simple is a fully formed near-masterpiece in its own right. It’s a dark tale of murder, adultery, and deception set against the backdrop of the Texas desert that winds itself up to a frenzy by the third act and maintains a breakneck pace towards disaster. An unyielding thriller that can keep an audience on the edge of their seat for the duration, the film stands up among the best work that the Coen Brothers have done in their long and fruitful career, despite still being somewhat underseen when compared to their more popular works.

The film opens with Ray (Getz) and Abby (McDormand) driving down a Texas highway at night. Their conversation concerns Abby’s failing marriage to Marty (Hedaya), who also happens to own the bar that Ray works at. Though their stated destination is Houston, the two pull into a motel and spend the night. Marty, suspecting their affair, has hired a private investigator, Loren Visser, (Walsh) to follow them, and he snaps a few photos of them in their hotel room as proof of the affair. When he provides this proof to Marty, the detective implies that for the right price he’d be willing to eliminate Marty’s problem, though Marty initially turns him down. Eventually, though, Marty seeks out Visser, hiring him to kill both Ray and Abby for $10,000. Rather than go through with the hit, Visser breaks into Ray’s home and steals Abby’s gun, then takes photos of them sleeping again. He returns to Marty with doctored photos, depicting the sleeping couple as corpses riddled with bullet holes, and after receiving his payment he double-crosses Marty, shooting him in the chest with Abby’s gun and leaving him to bleed out. Later, Ray returns to the bar to find an unresponsive Marty and Abby’s gun. Thinking that she has killed Marty, he decides to cover up the murder. The ensuing cover up leads to miscommunications between Ray and Abby, with each thinking that the other is responsible for the killing of Marty, while Visser engages in a deadly pursuit of the couple, hoping to erase any link to his crime.

Blood Simple is a master class in economical storytelling. At its core, it’s a straightforward revenge story, and even as its narrative gets more complex with the added double-crosses and misunderstandings, it doesn’t lose any focus or narrative momentum. The film essentially has only five characters, the previously mentioned four, plus Meurice (Williams), the other bartender at Marty’s bar, who finds himself tangentially caught up in the murder plot. Largely though, the film revolves around the principals in the love triangle and the murderous Visser, as they play out a savage game of cat and mouse in the Texas back country. With a few notable exceptions, the Coens eschew narrative ambiguity or overarching mystery as drivers of tension in the film, instead letting the audience in on all of the details of the story. Watching the characters make questionable decisions and wrong assumptions about one another heightens the tension for the audience, as the spectators are able to see the Greek tragedy unfolding in front of them, even as the characters are blind to their surroundings. In fact, the title comes from a turn of phrase in which someone is said to be “blood simple” after being rendered incapable of higher thought or decision making in the face of violent surroundings. The film makes the viewer want to reach through the screen and shake Ray and Abby, warning them of the impending doom that’s closing in.

The Coens also heighten narrative tension through the film’s masterful appropriation of classical noir visual style. The Coens have transported their crime drama from its usual urban setting to the middle of nowhere in the Texas desert, but they otherwise retain many of the stylistic cues of the genre. Aside from a few sunbaked exteriors, the film is dark, scenes often employing contrasting chiaroscuro lighting. Shadows are extreme, with characters’ faces often partially or totally obscured by darkness as they issue straightforward, hardboiled dialogue. There is more than enough visual information in the frame to make up for the paucity of verbal context. The shadows reflect both the dubious nature of the characters’ morality, and their duality. In this film, there are no true heroes; everyone is kissed by darkness in some way. Borrowing a trick from Sergio Leone, the Coens frame their characters in claustrophobic close-up, highlighting every pore and bead of sweat. At times, lazy flies are allowed to buzz in and out of the frame, crawling along Visser’s brow while he meets with Marty to discuss their dirty deals. To say the film is atmospheric would be an understatement, as its mise-en-scene does more than suggest the seediness of its environs, it insists upon the palpability of the griminess of this universe. At times, the desperation practically leaps from the screen.

In addition to successfully adapting the tropes of the noir film, the Coens begin to establish their own unique visual and narrative style in Blood Simple. The slow burning tension of later films like Fargo and No Country For Old Men is on display here, with the brothers already proving to be masters of pace and timing. The film’s first two acts are languorously paced. Scenes of dialogue are allowed to play out slowly, either unexpectedly erupting into acts of violence, or, rather, expected violence is denied. The Coens punctuate their shot/reverse shot with stylish tracking shots and rapid zooms that force the viewer to take notice. The final third of the film boils over with tension as Visser closes in on Abby and Ray, stalking them through her apartment. The characters have all gotten on a runaway train, and they’re forced to pursue the ride to its logical end. The violence in the film, as in most of the brothers’ later films, is matter-of-fact, an unfortunate consequence of the corrupted world in which these characters live. It seems that the Coens enjoy spinning yarns about everyday people who find themselves embroiled in larger schemes, and the roots of that narrative preoccupation are in Blood Simple. 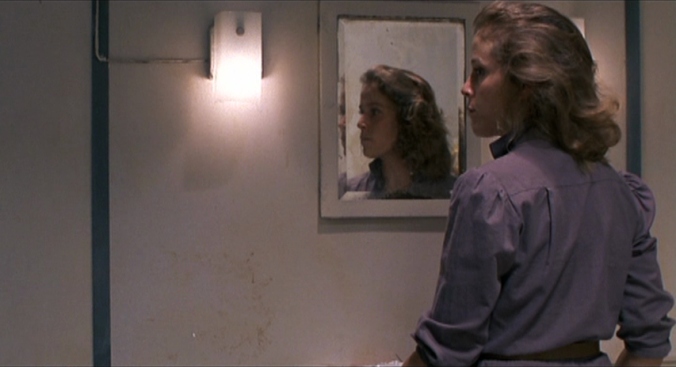 The performances in the film are all top notch, with the Coens already showing a deft hand at directing actors. In what was her first ever film role, McDormand is perfect as Abby. Her performance gives the character just enough subtle edge to keep her true nature in the dark until the film’s end. It’s hinted that Abby might be some sort of femme fatale, but her actual level of duplicity is hard to pin down. She’s a woman torn between a man she loves and one she fears, but McDormand never plays her as a dependent. She has steely resolve, and agency, that grows to a lethal capacity in the film’s final showdown with Visser. She’s able to balance manic outbursts of emotion and quietly determined acts of violence, and remain convincing in both circumstances. Neither Getz nor Hedaya are given much dialogue to work with, but they embody both of their roles with a lived-in physicality. Hedaya’s Marty haunts most of the film as a dead or dying presence, his body often visible on the edges of the frame as a reminder of the murder that has embroiled all of these characters. Getz plays Ray as a working stiff who’s simply in over his head, but his workmanlike approach belies a darker side to the character. When it comes time to dispose of Marty’s body, Ray drives him out to the desert where he finds out that Marty is mortally wounded, but not dead yet. He proceeds to bury him alive in a harrowing, slowly-paced scene that escalates the stakes and the tension in the film. There is no dialogue, but both actors give memorable performances, with Hedaya struggling mightily to stay alive while Getz slowly, steadily shovels dirt into his face.

It’s Walsh, however, who steals the film with his unhinged portrayal of the sleazy detective, Visser. Unlike the other characters in the film, there is little duality to Visser. Walsh plays him as purely evil, and in fact, he seems to enjoy and revel in his impurity. He breathes malice and corruption into his words, and his physical performance is palpably slimy. Visser seems to ooze into locked apartments, snapping his covert photographs and stealing bits of evidence, his stealth belied by the actor’s large stature. When it is time for him to pursue his quarry in earnest, Walsh plays Visser as a ruthless, efficient hunter, stalking Abby through her apartment until she is finally able to get the drop on him. Walsh’s performance is similar to John Goodman’s performance as Charlie Mundt in Barton Fink. Both characters come to symbolize evil incarnate in their filmic worlds, but unlike Mundt, Visser is rotten to the core. Where Goodman’s good-natured charm shines through some of Mundt’s cracks, Walsh never allows any light to permeate Visser’s dark patina. Even his humor is black as the Texas asphalt over which he tracks Ray and Abby.

In lesser hands, a movie like Blood Simple might add up to just another paint-by-numbers pot boiler. The familiar elements are all present here: a spurned lover spurred to murderous rage, cases of double-cross and mistaken identity, a Chekhov’s gun which fulfills its narrative promise. However, the Coens routinely elevate basic subject matter and genre filmmaking to the level of complex, high art, and that streak is begun with their debut. They take a very straightforward story in Blood Simple and filter it through excellently realized character work and impeccable visual style to produce an end result that is engaging and visionary. Most of their films are genre experiments, but rarely are they as pure as Blood Simple. The film sets out to deliver a compelling tale of murder and do it in a suspenseful manner, despite removing narrative ambiguity, and it succeeds entirely. Like the characters in the film, once things start to break bad, the audience is simply along for the ride, hoping to survive to the end. When that end arrives, the audience has been taken on a sickening ride that explores the depths of moral depravity and human capacity for malice. Many of the Coen Brothers’ narrative and stylistic obsessions are on display here, so it is a must watch for any fan of their corpus, as well as any fan of well-realized suspense and crime films.